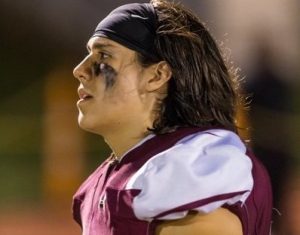 ST. LOUIS — One of several youngsters at DeSmet who turned heads last season, 2020 linebacker Tomas Farrar is putting in a lot of work this offseason as he hopes to help the Spartans rebound from a tough season a year ago.

A 6’0, 205 linebackers, Farrar had some bright moments at the varsity level a year ago. He is a physical, aggressive and disciplined linebacker, Farrar is able to aggressively come up, shed blocks and track the run. But at the same time, is disciplined in his pass drops as well as reading his keys.

He is coming off a strong sophomores season in which he learned a lot about playing linebacker at the varsity level in a brutal high school football league.

He started the season playing middle linebacker and eventually transitioned to outside linebacker. The switch helped him improve his overall game and boost his football IQ.

“I feel like I performed great, but there are still many aspects of my game that I’m working to improve this offseason,” he said.

This offseason, Farrar is working on improving his game, including his size and speed and refining his understanding of the fundamentals of the position. He has been attending Elite Football Academy in St. Louis as well.

He says the most influential person in his football life thus far has been his head coach at DeSmet, Robert Steeples.

“He has instilled in me that hard work in the base of any football player,” Farrar said. “I have learned a lot from the example he sets for our team. I am looking forward to playing for coach Steeples the next two seasons.”

So far this offseason, Farrar has taken a visit to Mizzou to watch the Tigers scrimmage with some of his teammates and plans to attend several camps and combines this summer. He has drawn interest from several FCS and FBS schools and says coach Steeples has told him several schools are impressed with his play.

“I’m looking forward to getting back on the field and showing my growth and improvements as I take on an even larger role as a junior,” he says.