Torrin Walker, a shut down corner at Edison making a name for himself. 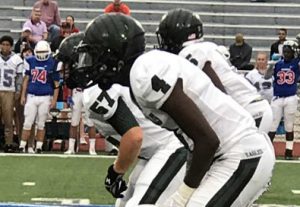 @TWaker11_
Torrin WalkerTorrin
Walker
CB/FS | 6'0 | 175
Edison | 2020 is one of the Tulsa area’s top lock down DB’s you will find. Torrin can play free safety or corner back, versatility is a strong suit of this talented kids game.

He has the speed and ability to shut down many of the best wide receivers in the area. A player and one of the best corner prospects in the 2020 class, keep an eye on Torrin Walker of Edison High.

Six Star — How did you season going this year

Torrrin —My season has gone good we finished with a record of 6-4 and 6-1 in our district play. I feel like I played a good role in our defensive secondary.

Torrrin —I improved on my ball skills and back peddle I trained all offseason with trainers Dwight Dobbins and Marcus Pugh.

Torrrin —The most influential person in my football life has been my papa we watch a lot of football together and just talk about the game.

Torrrin —I attended the rivals camp during spring break and in the summer time I trained and played 7 on 7 football with the Sooner 7.

Six Star — What schools have shown you interest

Torrrin —I haven’t had any college interested in me so far but I have got letters from Texas State.

Torrrin — The best game I had in my career is – this year against Coweta I locked their best player up he didn’t catch a pass on me it was my best game because I locked down their best player but I was able to get a bunch of tackles because they ran their offense around him.

Torrrin —My biggest weight room accomplishment is my dead lift in a powerlifting meet we had I maxed out on dead lift at 390.

Torrrin —A teammate likely to be a college star is Chester BaahChester
Baah
G/T | 6'3 | 290
Edison | 2019 because he is already committed to TU.

Torrrin —Hardest worker on the team is Chester Baah because no matter what Chester is always working and being a team captain pushing us to be the best we can be.

Torrrin —I used to play offensive line all the way till middle school.