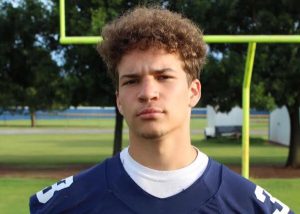 @trentlj33
Hard work gets it done for special teams standout and gritty LB Trent Littlejohn. The senior standout for Minco High School is a player that is a hard nosed win at any cost type of kid. He makes the Minco team better with his outstanding desire to compete and win.

Its not everyday you find that kind of student-athlete willing to sacrifice it all to help his team. A player that will put in the extra work. One of those type players is certainly Minco’s Trent Littlejohn.

Trent —I would say the most influential person in my life would be my pastor due to the fact that he is a Godly man and a good example to live by.

Six Star — What schools have looked at you, how has the college scene been

Trent —I really have enjoyed the few visits I have went to this year and am looking forward to the future visits I will attend.

Six Star — Most People don’t know this about me but I: