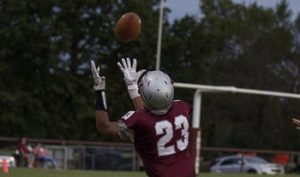 @trenton23harris
Meet a play making junior who always finds a way to make his team and those around him better. Trenton Harris will no doubt be one of those players that
I am a play maker

Six star football – How was your summer, camps, combines, visits, etc. Tell us about the experience and what you were able to take away from it, what camps you attended?

Trenton – Delta State university camp and Southeastern Oklahoma state university combine. At both of these camps I expanded my knowledge on route running and learned things I didn’t know.

Trenton- During this off season I have built my strength and have work to push my teammates to become better. P

Trenton – Right before kickoff I kneel down and say a prayer

Trenton – 2017 2nd round of the playoffs against Berryhill

Six star football – Player to Keep an Eye on

Trenton – Shade Watie and me