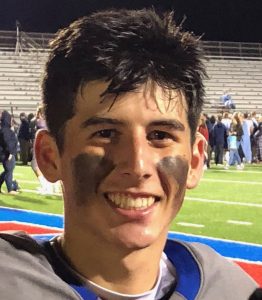 @trevonholt214
Standing 5-11, 160, the lean Holt is a player that plays an integral role in the success of perennial power Bixby’s football success. Simply put Holt is a very smart football player who does not make many mistakes and plays the game with a high IQ. You will find him studying film as much as he can and to figure out his opponents and how he can make them make mistakes. The Bixby snapper takes his job has the very important role of being a snapper very seriously and spends a significant amount of time working on that key aspect of his game.

Six Star —How do you think you have played this season

Trevon —I feel that I’ve played the best football I’ve ever played so far this season! I’ve become very physical on the offensive side of the ball by putting the defensive backs and backers on their backs from the receiver position.

Trevon —The things I’ve improved in the off season is getting stronger in the weight room and getting my speed and snap speed faster.

Trevon —The most influential person to me in Football is my special teams coach by putting me as the special teams captain. He counts on me to be the leader of every special team and believes that I can take my snapping career to the next level.

Trevon —I haven’t been to any camps but my kicker has said he will take me with him and talk to coach’s. And I’ll be sending film in to schools after this season.

Trevon —Most people don’t know this about me but I take my school very serious and don’t except anything but a 4.0 gpa. I want to go to med school and be a pediatric doctor.

Trevon — I am very superstitious so I get dressed the same way every time. I listen to music and pray every time before I take the field.