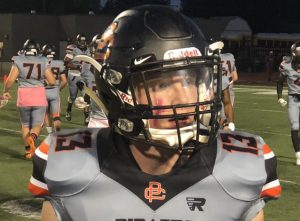 @Trevor_Hallum
Trevor Hallum brings an explosive style of play to the Putnam City football team, and is a player that has big play potential each and every time he touches the ball. The lean and athletic Hallum can be a very versatile receiver and his hands are a proven strength as well. Plays very hard and is a player that is tough to handle in the open field. One of the Oklahoma City’s players college coaches should for sure keep an eye on is this rising prospect from Putnam City.

Trevor — Antonio Brown is someone I look up to the way he plays and how close he is with God.

Trevor — Watch highlights of receivers, listen to music, put that sleeve on my left arm, and draw a cross on my left cheek

Trevor — Choctaw, I got my first varsity touchdown

Trevor — doubling my squat over the offseason

Six Star —Players to Keep an Eye on