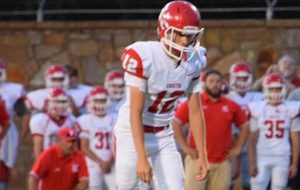 Every team needs a kicker that they can count on, the automatic guy, the guy that pressure means nothing to. Kingston High’s Trey Keatts is that man.

The senior sensation won Special teams MVP All-District accolaides. Keatts has attended Kohl’s camps such as a showcase in Dallas his sophomore year, junior year Trey went to the future stars showcase in Florida, and last summer went to Wisconsin to a national scholarship camp.

Keatts trys to be the same every time, consistency is a big key in the kicking game. As a kicker you only get so many plays during the game and you have to be consistent on every one of those reps.