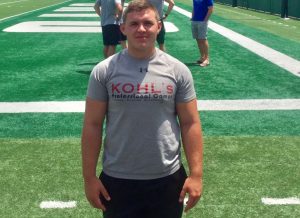 One of the state’s premier long snappers, Wentzville Liberty 2018 Trey Neal is hoping his ability to hone his craft will pay off with an opportunity to play at the college level and perhaps even beyond.

Despite his size (5’9, 190), Neal has drawn interest from a host of college programs and says he has patterned his game after another small long snapper, the Texans’ John Weeks.

“I’m not a very tall guy and neither is he,” Neal said. “I look to him because he is proving that smaller snappers can handle playing on an NFL or big D1 team.”

Neal has carved out quite a niche on special teams, earning national accolades for his abilities. For Liberty, he not only handles all the deep snaps, but is also a big part of his team’s kick coverage.

“On punts, my team runs a snap and release, so once the ball is snapped, I run down field to try and stop the other team from returning the ball,” he said.

Neal says he brings leadership, camaraderie, perseverance, grit, and dedication to the team.

“I lead by example and work every day to make the team better,” he said.

Neal says he is still becoming acclimated with a new team after his family made a move, but says he is hopeful Warrenton.

“I have only been with my new team for about four weeks now, but from what I have seen, I believe we will be able to compete,” he said. “We have a lot of great athletes that work well together and push each other to be better on the field and in the weight room, and the coaching staff is top notch. The team feels like a family and that is impressive to me.”

Neal says he spends the offseason focused on attempting to perfect the accuracy of the snap.

“When you are a long snapper, accuracy is something that needs to be practiced daily since accuracy is critical to the execution of a successful play,” he said. “What you do after the snap only matters if you give the punter or holder a great ball.

“Speed and strength are other things I make priorities to work on because you need to be able to get down field and make a play.”

Neal says he first began playing flag football in first grade, and tackle in third grade, but didn’t start long snapping until the end of my eighth grade year.

“Elite Football Academy and HK Elite Special Teams are the two places I receive most of my coaching for long snapping,” he said.

Neal says his dad has been the most influential person in his football career so far.

“He is the one that catches all my snaps and helps me train everyday,” Neal said. “He tells me when I have certain things that I need to work on and pushes me to work hard. I wouldn’t be the snapper I am without him.”

At last report, Neal did not hold any offers, but has heard from a host of college programs, including FBS programs such as Arkansas, Illinois, Indiana, Wyoming and Minnesota.

“I know snappers are usually the last guys to get offers from schools, but I’m still hoping I can pick up at least one offer before summer is over.”