Grain Valley standout is one of KC area's premier seniors. 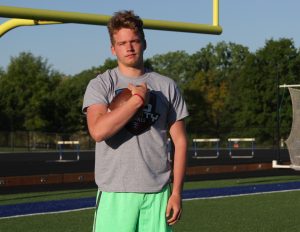 Tristan Pfeiffer has established himself as one of the Kansas City area’s premier players after a big season at Grain Valley.

At 6’4, 230-pounds, Pfeiffer brings a mixture of speed and strength to the defensive end position.

He helped lead the Eagles to an 8-4 record last season, and advanced all the way to the Missouri Class 4 District 6 championship game where they fell to Harrisonville, 33-10.

“My most important game last year would have to be Harrisonville because that was a game no one thought we would win, but we came out and showed them that we weren’t anything to joke about,” Pfeiffer said. “The game versus Oak Grove because it was a game that if we win we get the conference title and they are our biggest rivals.”

Pfeiffer says he has been focused on improving his quickness, staying low and coming off the ball strong.

He started playing football in kindergarten and says his parents kept him in the local leagues so he could play with kids he would play with in the future.

Pfeiffer says the person most influential in his football career has been his dad.

“He has always known if I was pushing myself hard enough or if I could go even farther and he always believed in me no matter what,” Pfeiffer said.

On the field, Pfieffer says he seems himself in NFL star J.J. Watt, a player who rose from walk-on status.

“I would like to think of myself as a J.J. Watt type of player just because of the strength, quickness and balance he as,” he says. “Also, the amount of intensity he brings to the team is something I think I do well.”

Pfeiffer does not currently hold any offers, but has drawn interest from several Division I programs, including Kansas, Western Illinois, Southern Illinois, Northern Iowa and Missouri State.