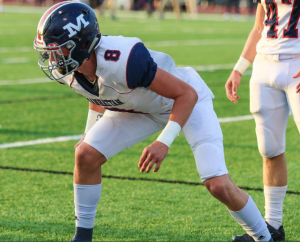 Manhattan 2020 ATH Tyce HooverTyce
Hoover
LB | 6'4 | 212
Manhattan | 2020 is earning a reputation this season as one of the state’s most versatile players, able to excel on both sides of the ball and in a variety of roles.

At 6’4, 215-pounds, Hoover is a physical football player that’s very fundamentally sound with his craft and very heady. He has learned six positions that he can step in and play as necessary but has excelled playing not only his primary OLB position but also as a TE and HB.

He brings a high football IQ to the field and also has good size, length and agility, but says there are still aspects of the game he is working on perfecting.

“Some things I need to work on is some of my blocking foot work and my top end speed,” he says. “I’ve definitely gotten better with my hands on offense and defense as well. Also my foot work has improved but still isn’t quite where I want it to be or where I think it needs to be for me to be my best.”

Manhattan is currently 3-1 this season after dropping a tough contest to rival Topeka but is armed with talent, depth and all the tools to put together a postseason run.

“We’re getting better every day and we’re still hungry,” Hoover says. “I feel like I’ve played fairly well this season being the senior captain and leader that I am. I’ve played over 120 snaps in all the games so far and I feel like that’s taken my game to a new level from a competitive and leadership standpoint.”

Hoover spent much of the offseason attending various camps and combines, including events at Kansas State, South Dakota State and the Lindenwood satellite camp.

“I had a great time competing with some of the best around at these camps and it was great to interact with some coach’s from universities,” he said. “I was able to take away from these camps important little techniques that I carried on with me to the high school season and passed on to my teammates.”

Hoover says his dad has had the biggest impact on his football career to date, but Manhattan assistant coach Adam O’Neil and head coach Joe Schartz have also played a big role in his development as an athlete.

“My dad introduced me to the game of football and shared his passion for the game and I fell in love with football just as he did,” Hoover says. “He taught me so much at an early age and has coached me up since. Even today I find him in the crowd before the game and get those final coaching tips before it’s time to go play play ball.”

Manhattan assistant coach Adam O’Neil and head coach Joe Schartz have also played a big role in his development as an athlete.

“Coach O’Neil is new to Manhattan with my junior year being his first year west of Illinois where he’s from,” Hoover said. “He’s impacted me tremendously from teaching me OLB foot work, how to use my hands on and edge rush and many other things that have moved and pushed my game to where it is today.

“Coach Schartz’s love and passion for the game of football is unmatched. He is an amazing leader and even better role model. He is like another father to me in the sense of knowing that he loves me as a player and as a kid. Coach has always been there for me and will continue to always be there for me even after I graduate from high school. I owe any and all of my success to Coach Schartz for all the times he’s pushed me to my limit and pushed me to be my absolute best as not only a competitor and football player but as a young man and a person.”

Hoover says his biggest weight room accomplishment was being able to hang clean 285-pounds this past summer.

“My freshman year I couldn’t clean 135 pounds and I went from that to cleaning 285 pounds headed into my senior year,” Hoover said. “This is important to me because it shows my improvement and perseverance in the weight room and the strides that I have made in order to become the football player I wanted to become.”

“I have interest in any school that is willing to give me the opportunity to fulfill my childhood dream of playing college football,” he says. 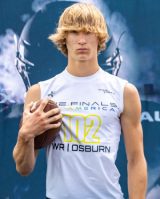 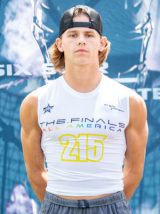