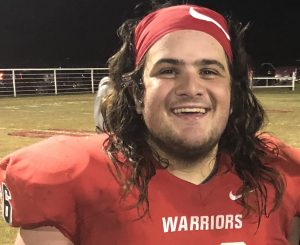 @tcbeller66
Its not every day that you see an offensive lineman named District Offensive Player of the year, but that goes to show just how dominating of a force Washington High School’s Tyler Beller was as he anchored the OL. Beller was just selected as 2A-district 7 -Offensive Player of the year. That doesn’t happen much for offensive lineman!!!

Tyler, a three-year starter on the offensive line, made his impact felt on on both sides of the ball in 2018. He is one of the strongest players in Oklahoma, Beller benches 345 and squats 465. Not only a physical specimen, Tyler also shows great mental knowledge of the game gave which gives him a great advantage along with spot on technique and foot work. Beller has great play that is low off the ball and he uses great strength to drive off the line.

Tyler—Our season was full of a bunch of adversity we had to overcome and feel like I played my best season and led the offensive line to be one of the best lines in 2a Last off-season. I improved is my speed improving my 40 time 2 tenths faster than last year to a 5.45 And raising my bench max to 345 and squat max to 465

Tyler—Reaching 315 my junior year on bench

Six Star — Teammate that could be college star