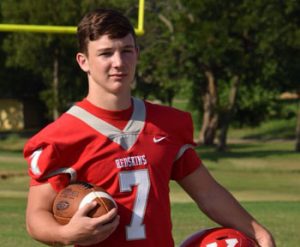 Meet one of the star receivers in Class 2A-District 8…junior Kingston Redskin Tyler Blanchard. He is one of the more explosive players you will find and averaged over 20 yards a catch this year.

Tyler – is owner of C4 Sports and Performance in Durant OK, Sean Cooper been with him for 3 years now.

Six star football – What camps did you attend

Tyler – I didn’t attend any camps this summer but I am about to join the 7 on 7 team in southern OK that competes at the national level with D1 coaches Improved everywhere this summer speed, strength, mentally. Coach Coop got me right.

Six star football – what colleges are looking at you

Tyler – I’ve talked to some D2 colleges like Southeastern Oklahoma State, they invited me to come watch a workout before.

Six star football – Teammate to Keep an eye on