Staley defensive end Tyler Miller is emerging this offseason as a rising prospect in the senior class. 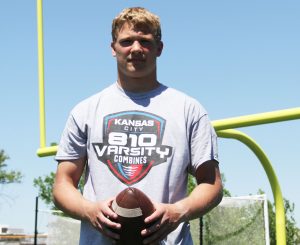 KANSAS CITY — Staley 2018 defensive end Tyler Miller is emerging this offseason as a rising prospect in the senior class. He was a first-team all-state performer last season, Miller is a 6’3, 225-pound defensive end who plays with aggression and goes hard every down.

“A defensive end I use my hands well on pass rushes while also using my feet to set up countermoves,” Miller said. “I feel I am a very technically sound defensive end and contribute a lot to our running defense. The option is also a strength of mine as I try my best to make it hard for the quarterback to tell whether or not I’m playing the back or him and often times can make him confused on a play.”

Miller said the Falcons semifinal game against Vianney last season was among the biggest games of his high school career to date despite a 34-31 loss.

“Personally, it was one of the best games I have ever played,” Miller said. “I had never been so focused in my life and I racked up the most tackles I had gotten in a single game all year. I did not however have a sack that game. I knew how quick the quarterback was and I needed to keep him in the pocket and force him to make a perfect throw.

“Vianney ran so much quick game that I often did not have the time to get to the quarterback. As a result, I focused more on making sure my job was done for the better of my team.”

“I have a lot of confidence in my team this year to do big things,” Miller said. “We had to replace some of our offensive line that graduated but the linemen we have now have stepped up greatly and our team has some good weapons working behind them. Our defense has a lot of returning starters so we will have experience on that side of the ball this year. What will really make our team good is the amount of leadership in our senior class and the fact that we are a very close group and have a lot of great chemistry and brotherhood.”

Miller says he began playing football in first grade for the Northland Chiefs a team in the North Suburban Youth Football League and played for the team through eighth grade.

He says the most influential person in his football career besides his dad who taught me hard worth ethics and how to be a good competitor is Kevin McConnell who was the director of Miller’s youth football club and who lived down the street.

“I still remember when he first asked me to play and his words of encouragement,” Miller said. “Kevin and his family become close friends of ours.”

When Miller was in fifth grade McConnell was diagnosed with colon cancer and for the next two years he battled the disease.

“I can recall like it was yesterday when I watched a hospital bed being moved into their house and being told that it wasn’t a matter of if he would die, it was a matter of when,” Miller said. “After football practice one night my dad and I walked down to see him for the last time. It was the last day he was able to talk. I remember giving him a hug and Kevin looking right into my eyes he muttered, ‘If you love something, you go after it, with everything you have.’

“That was the last time I saw him, but he is the reason at the sole of all my motivation because he inspired me.”

Miller says the player he looks up to the most is former NFL quarterback Peyton Manning.

Miller currently holds an offer from Missouri Western, and has drawn interest from a host of colleges from various levels.

Kansas and Iowa state have shown him the most attention from FBS schools and a handful of Ivy league schools have contacted him as well, including Cornell and Princeton.