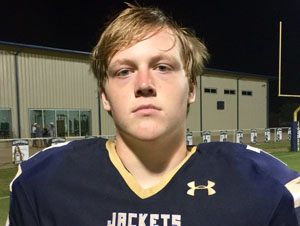 @BigMorm72
Meet one of the best lineman prospects in the junior class, Wes HineWes
Hine
OL | 6'5 | 270
Kingfisher | 2020, Hine is a player that is already getting some big time attention from schools like Kentucky, Cincinnati, and Iowa. His size and athletic ability, toughness and pure physical nature on the position make him a player that is on the radar of several big time programs across the country and a player that will no doubt gain attention as his senior season approaches. Hine’s style of play is focused on form, hand placement, and physicality, all things he excels in quite well. Every week during practice Wes tries his best to focus on those three things.

Six star football – How was your offseason

Wes- This offseason I have definitely focused on strength and conditioning, my form, and my flexibility, and I can tell it’s working on the field.

Wes- The most influential people have been my parents. My dad always takes some time to watch film with me and fix what needs improvement. My mom has always been there for me during tough losses and long trips to camps. My mom and I sometimes traveled halfway across the country to some camps.

Wes – The camps I’ve been to were North Central College, Lindenwood, Iowa, Kentucky, Miami of OH, Northwestern, and Princeton. I feel like I’ve learned something new every camp and it was great to talk coaches during the camps.

Wes- Some college interest I’ve mostly received are from Kentucky, Cincinnati, Iowa, and Princeton. Some other schools I’ve kept in contact with are Miami, Southern Illinois, and Tulsa.

Six star football – Most people don’t know that I

Wes- eat a Snickers before every game. That has its own story

Wes – is always taping my own wrists and shoelaces. I’ve been doing that since my 8th grade year in almost every sport.

Wes – would have to be anything by Travis Scott, to be honest.

Wes- would have to be anything math related. I have big dreams of becoming an engineer or orthopedic surgeon in the future.

Wes- would have to be against John Marshall. As a team, we knew how big that game was and I can tell everyone was playing at their best.

Wes- would have to be bouncing back from my minor leg injury last year. I could barely squat into position but I trained hard this offseason and I bounced back from it.

Six star football – teammate most likely to be a college star

Wes – would have to be Jett Sternberger. His older brother currently plays at Texas A&M and Jett can sling the ball the field. But there are other players like Declan HaubDeclan
Haub
TE/DE | 6'2 | 210
Kingfisher | 2019, Trey Green, and Riley Myers that I can also see being excellent college players.

Wes- would have to be Stone Snodgrass. Everyday during practice, lifting, or a game he goes 100% mistake or no mistake.

Six star football – The player to keep an eye on

Wes- would have to be Sophomore Cade Stephenson

Cade
Stephenson
ATH | 6'2 | 195
Kingfisher | 2021. He is an all-around athlete, he can throw, catch, and run the ball extremely well. He can also play defense well and is not afraid to hit someone.