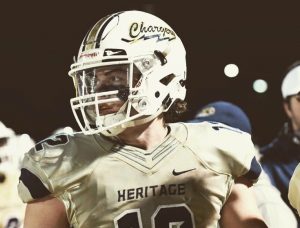 @willdunn32
Standing 6-4 and weighing 225 pounds Will DunnWill
Dunn
DE/TE | 6'3 | 250
Heritage Hall | 2020 is the Mr. Do It All guy for Heritage Hall, and that goes for both sides of the ball as well. QB/TE/DE, throw it, run it, catch it, block for team, tackle it and sack it. The reason he is this type of player is because he is a rare breed of an athlete that plays tough, physical, competitive football with a blend of athletic ability that makes him unstoppable on the field. Physical is defiantly the best word to describe Will Dunn and his style of play, but with unfortunate injuries Dunn had to became very versatile and adapt to the new positions that he was put in.

Will—My dad’s work ethic is very influential because he works hard every day for everyone around him and does not expect all the credit-that’s the same example I strive to set when I’m on the field for my teammates.

Will—I competed in NFA’s “The Duel” over the summer where I ended up getting 6th place out of 150 plus QB’s. I was able compete against great kids from all around the country.

Six Star — What things did you improve upon during the summer

Will—I continued to spend my whole summer at state side camps as a quarterback, but I never touched DE, TE, or FB- which are the positions I have fallen in love with and hope to have a college future in. I had to completely switch my style of play this season from my off season. However over the offseason, I started adjusting as an upperclassmen and became more of a leader which is something taken with me no matter the position. I lost an important season last year due to an MCL tear, but a couple local colleges have still reached out. I’m hopeful that these new positions, along with next week’s state game and my next offseason will open up some new doors for me.

Will—I always eat my favorite food, and draw the same things on my wrist tape before every game.

Will—Probably at the moment For However Long by Bryson Tiller

Will—Probably one of the more recent games like Kingfisher since it was a competitive game and I had multiple sacks, 12 tackles, and started on both sides of the ball.

Will—Connor Carey, class of 2019. Over looked, one of the best overall athletes in the state. Break out year and still has more in the tank.