One of state's top kicking prospects has a huge leg at Fairview. 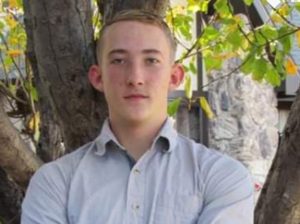 @RamayZach
Meet one of the nation’s top punting prospects….Zach Ramay of Fairfield. He is an intense player but very fluent and natural in his game. Despite the ups and downs he has he can’t and won’t be discouraged. He is fueled by winning and is a competitive by nature.

He is a ProKicker5star punter, top ranked 2019 punter in America by Ray Guy Punting, 2018 Oklahoma 2A 400 meter state champion on the track and field team. Natural athletic kid that is a great kicker with some major range and skills both as a kicker and a punter. Ramay also lines up as a slot wide receiver and on defense anchors the DE position. Has worked with Uwe Von Schamann with kickoff and field goals, but Ramay is a self taught punter. Played an integral part in Fairview’s victory over Chisholm this year. Has a 15 PAT streak and averages 42 yards per punt. East Central and SE Oklahoma State have shown the most interest. Ramay has also talked to Penn State.

Zach —My dad has been the most influential person in my lifeFrom a young age, watching games and playing in the yard to now, when all I can focus on is the negatives of my game he points out the positives. He is always helping coach me through whatever the game throws at me.

Zach —I attended the College Preparatory Showcase at Missouri Western with KCKicking last December, and finished ranked number 2 punter in c/o 2019. I also worked with Uwe Von Schamann over the summer. I finished off with a charting session with Prokicker to be ranked the number one c/o 2019 punter in the nation. If I’ve learned anything, it is to keep a cool head and focus on the moment, and there is always room for improvement. Have a close relationship with the lord.

Zach —Favorite class is Physics, it’s great getting to apply the things I’ve been taught for years.

Six Star — How did you improve your kicking over the summer

Zach —I’ve gotten stronger and faster over the summer, Coach Nelson loves what he does and has had a great impact on the team and myself. Can’t thank him enough.

Zach —Kade Dillard, QB and Chad McGolden, WR should both be wearing different colors next year.

Zach —Hardest working player definitely has to be Drew Houk. He is a monster on Defense. A great football player! I see big things opening up for him.

Zach —Players to keep an eye on, Drew Houk and Brody Wills! They will both be making some noise next year!