Anderson a leader by example on the Defensive for Eufaula 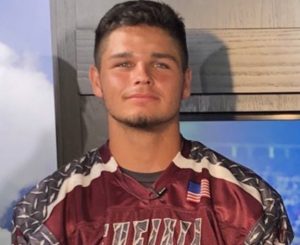 @Zac10Anderson
You won’t find a player more hyped up to play football and make a big play than Zach Anderson of Eufaula. He is a very confident player who knows just how to be a leader and a player that his team can count on and he does just that. Makes it happen day after day for his Eufaula teammates and coaching staff.

Six Star —Describe your season and, how do you feel you played overall for 2018?

Six Star —What are some of the things that you feel you improved upon during this off season?

Zach—I improved in my footwork mainly because I have to man running backs sometimes and they have some of the best speed and quickness on the field.

Six Star —Who has been the most influential person in your football life so far?

Zach—My strength and conditioning coach who is also my Linebackers coach at Eufaula has been a great influence by helping me grow in my faith in the Lord and helping me become the most versatile athlete I can be.

Six Star —Tell us about your summer, camps, combines, visits, etc. Tell us about the experience and what you were able to take away from it, what camps you attended?

Zach—I attended the Rivals football camp in Texas and a few colleges as well but no real interest in me.

Six Star —What kind of college interest have you had so far, and what schools are showing you the most interest?

Six Star —Most people don’t know this about me but I :

Zach—Nap for 45 mins, listen to music, and pray!

Six Star —What has been the best game you have had in your career and why?

Zach—My best game was Stigler. The game went into overtime and we scored, kicked the extra point and go to defense to potential stop them. They did an option and the quarterback kept, met me in the hole and got tackled at the one yard line!

Six Star —Player to keep an eye on