Putnam City North Dortch is a player that gets the job done for his team!! 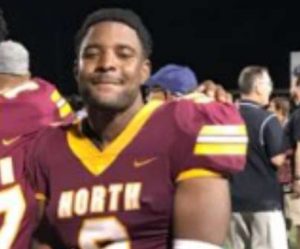 Dortch is the durable work horse of the team, and a heartbeat of the team. We ranked Dortch at about the 25th best player in Oklahoma, Shows toughness of a hard nosed defender who is a good play maker in space. Fills the holes well from is OLB position and really has good instincts for being in the right place to make the play. Plays smart and knows how to use his speed well to get to the right spots on the field. Big hitter who makes ball carriers pay the price and has a very good motor. Was invited to be part of the USA Football team. Attended camps at Kansas State and UCO.

“I would describe my style as a team player and does whatever it’s takes to make the play, said Dortch.”

Zachary —My trainer Mike woods and my parents

Six Star —What camps did you attend during the offseason

Zachary —I went to K Dtate camp and UCO I learn how college going to be like and what I need yo work on http://to.play at that level Right now

Six Star — What schools are looking at you for college

Zachary —anything with 21 savage

Zachary —I’ll pray before I run out the tunnel