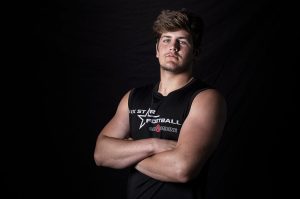 Here, we take a look at several Oklahoma DL/DEs who raised their profile at the event.

40 — 5.03 … Broad 8’9 … Short Shuttle 4.65 … Power Ball 32’6
One of the most underrated DE in the state, Bloodsworth has been racking up some honors at camps he has attended during the offseason. Really does a good job getting in on plays and using his feet to chase down QB/RB in the backfield and is one of those relentless play makers for sure for a Cache team that will look to make some noise this upcoming season. Also a great all around kid and student-athlete who is a very good student in the classroom. We really like him as a great college recruit and a great addition to a program. Ranked tops in the broad jump with a mark of 8’9, was third in the shuttle with a time of 4.65, and ranked third in the 40 yard dash among Oklahoma DL with a mark of 5.03. 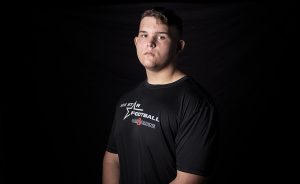 40 — 5.53 … Broad 6’3 … Short Shuttle 5.50 … Power Ball 29’1
A teammate of Bloodsworth at Cache, Brinsfield should form one of the most formidable DL in the state. With Bloodsworth’s speed and play making ability on the outside edges, Brinsfield will provide a bulk run stopping and pass rushing tough man in the middle of the Cache line, standing in at a menacing 6-4, 290 Brinsfield was one of the biggest lineman at the 6Star combine, you have to love his size he brings to the game.

40 — 6’22 … Broad 5’8 … Short Shuttle 5.37 … Power Ball 26’11
One of the better young class A Ballers, Minco’s up and comer Luke Clement stands 5-11, 245 so shows some very good size already as a sophomore to be in 2019, Minco will be in good shape for many years to come, we think Clement has the play making ability to slide into a key spot for Minco and be a tough player against the run as well as another good pass rusher to throw into the mix. 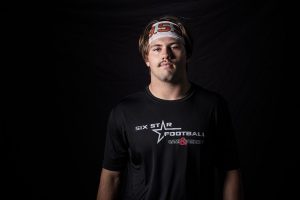 40 — 5.12 … Broad 8’6 … Short Shuttle 4.56 … Power Ball 35’3
Corn had one of the best overall combines of any player at the camp and ranked in the top five for three of his four combine tests. The 6-0, 235 DE for Tahlequah we really like based on not only his solid frame and size but we really think he is one of those really underrated. He ranked second among all Oklahoma DL for the shuttle (4.56) and the broad jump 8’6 and was fifth in the powerball among OK DL with a 35’3 distance. Really a kid that is tough and gets in the the backfield well, Corn is a player that for sure needs to be getting some college looks and recently drew an offer from Oklahoma Baptist.

40 — 5.34 … Broad 7’2 … Short Shuttle 5.06 … Power Ball 34’7
The big man from Davenport is a player that looks to bring bulk and power to the Davenport DL and OL, two way player and key big man up front he gets a good push on both sides of the football. Cross is a pure rough nosed baller who does not mind to mix it up and get nasty to get the job done. Powerball 34’7 a solid looking strong man and a player that should be a good one.

40 — 5.66 … Broad 7’1 … Short Shuttle 5.04 … Power Ball 34’4
One of the better looking athletes at the camp, Union big man will be part of a tough DL for the star studded club. The big man really uses some good technique and is a very tough player to block off the edge or in the middle. Dorn is 6-1 270 and is a tough matchup with his physical style of play, also uses his feet well and hands well to push past his blocker and makes nice plays.

40 — 5.06 … Broad 8’5… Short Shuttle 4.88 … Power Ball 33’7
Tested very well at the combine, was third best among TE/DE with a mark of 4.88 in the shuttle and was fourth among Oklahoma big men in the 40 yard dash with a time of 5.06. One of the bigger and more impressive athletes on the field, the bulky and big mand can be physical and we like his footwork and how well he moves, also see some potential with his hands and catching ability. Is a player that has the size and ability to be a very good looking prospect and one that plays hard and is a tough player. 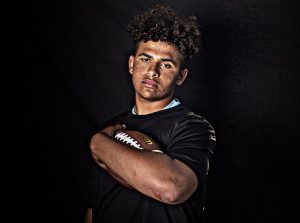 40 — 5.16 … Broad 7’0.5 … Short Shuttle 4.78 … Power Ball 33’11
We like him as one of the top pass rushing lineman and most physical players in the state this season. Hughes is not only tough but a quick footed pass rusher that really mixes it up well and has that unique combo of power and speed. Good size for a college rush end and is a player that posted a 4.78 shuttle and a 33’11 powerball at 6star combine.