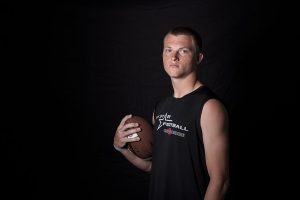 Here, we take a look at several quarterbacks who raised their profile at the event.

On a team that has some spots that will be competitive Bradford will battle with fellow SixStar standout Ben Winters for QB time for the Bruins this season. Bradford and Winters are in the same class as well and are both 6-0 or better and both very competitive. Bradford had and very good 4.47 short shuttle run and is a QB that has shown good footwork and well as one of the most respected 34’9 powerballs among the OK group at 6Star. Running a 4.75 in the 40 yard dash, Bradford was the second fastest Oklahoma QB at the camp to Andrew Carney

Andrew
Carney
QB | 6'0 | 185
Collinsville | 2022 (Collinsville) and for this season is a QB that will depends upon his footwork as a good strength to his game. Look for Bradford to give the Bartlesville offense so good speed.

Bunch and fellow teammate and QB Cale Matlock were the lone class of 23 QB’s from Oklahoma at 6Star, Bunch is getting a jump on the competition and already posted a 4.69 in the short shuttle and is a player that could factor in the offensive mix for a talented group at Tahlequah. 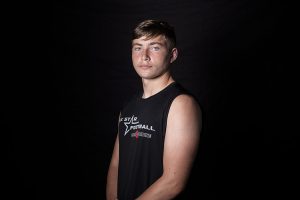 Where do we start, wow….What an outstanding combine for the freshman QB/RB from Collinsville. This kid can do it all, a camp warrior. Carney recorded the fastest 40 time of any QB from Oklahoma at SixStar (4.72). Very impressive speed for the sophomore to be. Andrew also tied Minco’s Cavin RussellCavin
Russell
QB | 6'1 | 200
Minco | 2020 and Perkins Tyron’s Austin Mages

Austin
Mages
QB | 6'0 | 185
Perkins-Tryon | 2021 for best broad jump among Oklahoma QB’s with a mark of 8’11. Carney flat got it done with a 4.50 in the short shuttle and a powerball of 33, also both quite respectable recordings for the youngster and potential star. Carney is the type of athlete the Collinsville thrives on, one who can make the most out of every play, one that is a team leader and a pure skilled athlete.

Eaton proved despite being one of the younger competitors at the camp he could hold is own and did just that with the top broad jump of any Oklahoma 22’ QB at 6Star (8’2). An athlete, Eaton also clocked a 4.68 in the short shuttle and a 29’6 powerball. On a team that is deep with talent Eaton should be an interesting player to watch for the Roughers in 2019. 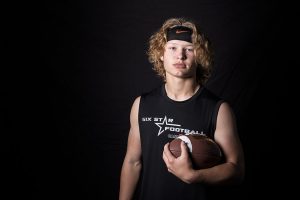 Funk, just a sophomore this past season has waited in the wings behind talented players in front of him and now its his turn to take the role at offensive play caller for Davenport. Davenport should be in capable hands with the young up and comer that will only get better with time. With two years left Funk could be something very special, we see some nice potential, with a camp distance of 35’3 in the powerball you can tell Funk has some of that explosive potential at a very young age and its that kind of spark that should draw some attention to this promising and potential all-state selection. Also an 8’0.5 was one of the more respectable distance among this group of SixStarfootball Oklahoma QBs.

Packing a load, Edmond North’s James Henault is the QB that packs the biggest punch at 6-0, 230 he has the ability to make you feel the pain. Edmond North will be a team that will look to be as physical as they can and needs tough nosed kids that want to win like Henault in the mix. 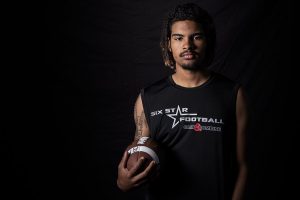 One of the most talented looking athletes, Johnson is another play making and athletic machine for one of the more talented offensive units that returns for 2019. There are really a lot of impressive athletes on the Spiro squad and Johnson has some very crafty skills as QB. Eager to follow up where Emporia State signee Deontei BraggsDeontei
Braggs
QB/ATH | 6'1 | 175
Spiro | 2019 left off, Spiro looks to be in good hands for the next few seasons with Johnson leading the way. Johnson tested with respectable numbers at the combine with one of the most impressive short shuttle times of 4.47 and we feel is has some of the best potential among OKLA QBs attending the ’19 camp. Can really take off a game and manage the offense well. Big things are in store for Johnson.

Mackie is a fine athlete on a deep Millwood team that no doubt will be in search of a state title in 2019. Mackie is a player that uses his athletic skills very well on the football field and posted solid times in the 40 and short shuttle. His 8’7 broad jump also was a number that showed what he can do and some of his athletic prowess. Mackie showed he was one of the faster OK QBs at 6Star with a 4.78 40 time good for third best among our ’19 camp attendees.