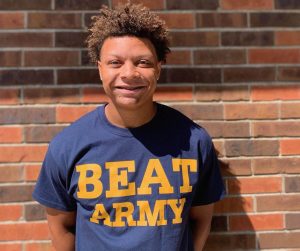 A high character athlete who is as strong in the classroom as he is in the weight room and on the field, Orchard Farm AJ Snow

“When I was on the zoom meeting with all the coaches they really talked about how much the team cared for one another and that was a really big thing,” Snow said. “I also chose Navy because of the wonderful coaches. Navy has the top coaches in all of football and I believe that navy can snap me into an amazing man.

“During my recruitment I developed a relationship with coach Yok. He is an amazing person. He helped me really get a feeling for the school and it’s atmosphere which really helped with my decision.”

Known for his abilities at quarterback and versatility on the field, Snow brings terrific athleticism to the field with a strong, physical frame and the ability to fill out a stat sheet at a combine. He has recorded a laser timed 4.5 40-yard dash and a 3.9 short shuttle and eight reps in the bench at 225 pounds.

Snow says he could play safety at Navy, but is open to other possibilities as well.

“I told the coaches that I just wanted to be on the field and make play,” he says. “It doesn’t matter where they put me I will make it happen.”

Snow says he had an opportunity to watch Navy play in person on a game day visit at Tulsa and walked away impressed with 2019 standout QB Malcolm Perry.

“I saw such an explosive and dynamic player,” Snow says. “Then I did some research and he wasn’t always like that. It took great coaching and hard work that he received and learned at Navy.”

Snow says he has managed to find a way to keep working throughout the spring when many things were shut down due to COVID 19.

“The Covid 19 has hit my school hard,” he said. “They shut down all sports till July. Being a leader and a captain of the team I have still been getting as many guys as I can up to the field at 7 a.m. so we can be conditioned and ready to go when practices start.”

He reports a 3.7 GPA and 27 ACT and chose Navy or several other high academic programs.