Park Hill standout talks about his commitment to Iowa State. 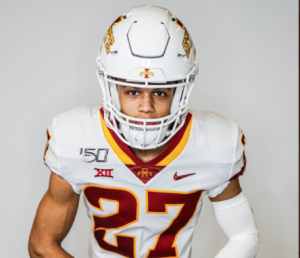 Park Hill 2021 WR Jaylin Noel, one of Missouri’s most exciting playmakers in the rising senior class, has committed to play at Iowa State.

He had originally narrowed a long list of schools to six, the Cyclones, Nebraska, Iowa, Minnesota, Kansas State and Wisconsin — and later narrowed his options to just Iowa State and Nebraska before making his decision on May 31.

“What stood out to me was the people there, they were all genuine and true,” he said. “Also the offense that they have shown me fits my playing style very well, it lets me get miss matches and impact the game.”

An explosive playmaker, Noel plays much bigger than hist listed 5’11, 175-pounds would suggest. He caught 42 passes for 769 yards and nine TDs, rushed for 251 yards and three TDs — showcasing speed, quickness and the ability to get vertical. He is an explosive route runner, can shake defenders in space and is able to breakaway from defenses in the open field.

“I would say Iowa State is getting a determined leader, playmaker, that will do whatever it takes to win,” he says. “I want to break records not only at the school but nationally.”

“Even though he isn’t a WR, I would say Purdy is a guy that has impressed me every time I’ve watched them play,” Noel says. “Just the way he leads and has a determination to win.”

While COVID-19 concerns have affected sport nationwide, Noel says he has continued spending a lot of time working on preparing himself for his senior season and beyond.

“I’ve just been working on polishing my overall game and becoming the best version of myself,” Noel says. “Putting on muscle and adding more strength to my game will also be big for me. The only thing that the virus has done to me is not allow me to be in the weight room. I have been able to do a lot of body weight workouts to sustain my strength.”