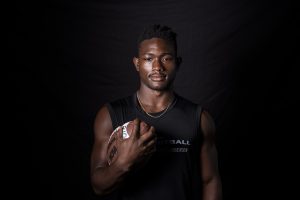 EUFAULA – Its not very often an athlete the caliber of Noah Alexander comes around, but when he does a lot of heads turn.  The 40 yard dash winner of the 6Star football combine in 2019, Alexander rocketed to a time of 4.3 to beat another pair of D1 signees for fastest man.

Alexander not only has speed but also is a guy that is one of Oklahoma’s elite athletes and a guy that is just on the verge of several big time offers that are very likely to head his way  soon.

He recently received offers from two of the nations top military programs, Army and Navy.  Both programs are teams that are on the rise and both have very strong traditions of athletic and academic excellence, two things that Alexander considers key priorities in his college of choice.

“I was very excited to have received my first offers and the fact that they were D1 made it that much more exciting, all my hard work is paying off and Newberry from Navy offered me while Woods from Army offered me,” Alexander said.

“I like both programs specifically because they are top tier teams and they’re academies so academics is really good there too.”

“All teams I’ve talked to want to use me as RB still or a SB to run the edge. I’ve been focusing on really everything, I run hills, lift and do sand work almost daily.”

During the quarantine Alexander has continued to be one of the hardest workers out there and is a guy that continually strives for excellence and improvement.  A player that believes in hard work pays off and indeed it has for Alexander who has thrived in the Eufaula Ironheads program and been a key offensive weapon out of their backfield for the past three seasons.

“I know lots of players are using this time as a “break” that’s not how I see it.  On top of that I work 5 days a week long shifts then go train right after. Taking days off will hurt when the season comes around.”

Eufaula finished 10-2 last season and undefeated in their district and with Alexander returning and some other nice players expect some great things in store for 2020.

★LINEBACKERS ON THE RISE IN GREATER OKLAHOMA

★OFFENSIVE LINEMEN OF GREATER OKLAHOMA ON THE RISE

★GREATER OKLAHOMA RBS TO WATCH FOR IN 2020

★TULSA AREA QBS YOUNG AND ON THE RISE TALENT

★GREATER OKLAHOMA QB’S TO KNOW AND WATCH IN 2020

★TULSA DL THAT ARE BIG STOCK RISERS FOR THE 2020 SEASON