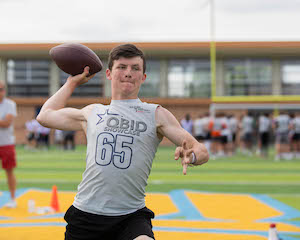 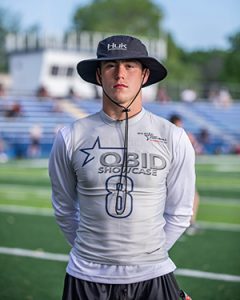 @briggsbartosh
A multiple position athlete who can see time as a ball carrier and dual-threat QB as well. He is a talented athlete who has very good athleticism for his position, brings speed and creativity and is the type of player who can move through defensive coverage and break away and create. Last season he saw most of his time as a RB and had 703 yards and 11 touchdowns on 89 attempts, averaging a solid 7.9 yards per carry. As a QB he was also productive, with two touchdowns, 175 yards and a completion percent of 68. An athlete who showcased strong combine numbers over the summer, recording a 4.50 laser 40, 40.3 vertical, 127 broadjump, 40’ PB, and 4.3 shuttle. 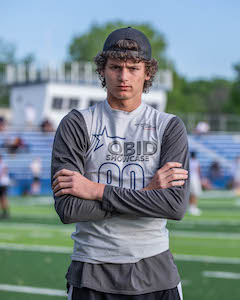 @BryantBull1
An emerging QB prospect to keep your eyes on in SWMO, Bull has the size, mobility and arm strength to make a statement this upcoming season. He’s listed at 6’4, 175-pounds, and has great vision and a natural ability to scramble some in the backfield and make good throws with defenders pulling him down. He has a strong, live arm and can deliver a variety of passes on time and with accuracy even when making the occasional throw off his back foot. Last season he threw for 1,324 yards and 13 touchdowns but is expected to increase his rushing attempts this year. Bull was a player of note over the summer at several camps and combines and recently showed out at the University of Arkansas where he posted a 4.70 40, 34.5 inch vertical and 9’9 broad jump. Also a baseball standout and a solid student in the classroom who reposts a 3.74 GPA. 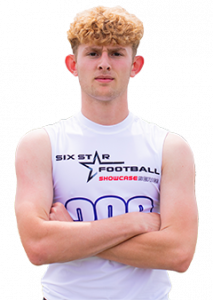 @Wil_Carlton32
A productive QB who throws a catchable ball down the field, Carlton is another talented SWMO QB who has good vision and a solid IQ. He is an athletic player with good speed and a strong arm. A dual-threat option for Marionville who can find his skill player inside and outside the numbers but is also very confident in his rushing ability as he brings solid speed and creativity on the ground. As a sophomore he threw for 1,668 yards with 21 touchdowns through the air and 694 rushing yards as well. He also completed an impressive 72 percent of his throws during the season and he showcased stronger accuracy and better form and footwork over the summer. 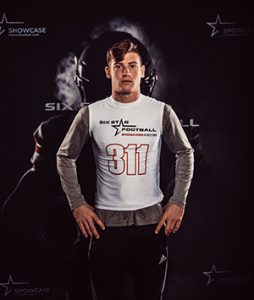 A strong athlete who also shows up as a wrestler and in track and field. Dombrowski is a dual threat prospect who can find his receivers in the end zone and also move the chains with his legs. He can scramble in the backfield and make throws while in motion and is quick to form relationships with new receivers. He showed improved ball placement and repetition at the Six Star Football QBID showcase and was also able to showcase his long ball as well. Also a participant at numerous other camps and combines over the summer including K-State elite football camp and Alabama Crimson Tide football camp. A player expected to make a statement with Ray-Pec this season.

@ahedgecorth11
Hedgecorth is a three sport athlete who splits his time between baseball and wrestling as well. He’s an extremely confident prospect and it doesn’t take long for him to start making plays. He has solid mobility and can move things with his legs if he has to. That said, he can see the field well in his very comfortable throwing into traffic areas. He has good ball placement and can work a field from the outside and work his way in. Has good timing to his throws and a tight spiral and always seems to put the ball in a place where his receivers can complete the catch. Hedgecorth threw for 2,309 yards, 25 TDs, six INTs and completed nearly 68 percent of his passes as he helped Smithville win a district title and advance to the state quarterfinals last season. 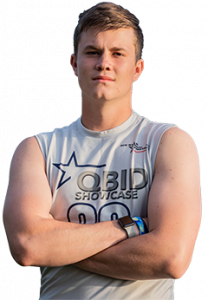 @samvandyne
An Empire 7v7 standout who brings a terrific combination of size, length and  timing to the QB position. Van Dyne shows a strong pocket prospect and a big arm, capable of making all the throws down the sideline, across the middle of the field and can even fit the ball in tight windows with defenders surrounding his teammates. A player who can move outside and scramble or pick up some yards on his own, but he is more of a pro-style QB with poise and the ability to see the rush and safeties and work through his progressions. He is a strong presence in the pocket, but can scramble and make plays when necessary. Also a standout student, Van Dyne reports a 4.0 GPA and his on field work has drawn interest from several programs, including Mizzou in early June, Louisville, among several others. 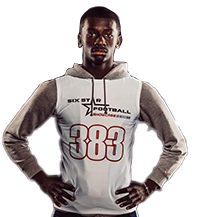 @joseph10vick
A multiple sport standout and perhaps one of the more underrated quarterback prospects in the state. At 6’3, 180-pounds, Vick has terrific size for a QB with a long, rangy frame. He has a smooth, fluid throwing motion and can deliver the ball deep downfield or hit the underneath and intermediate routes. Vick is very capable of staying in the pocket and is good at stepping into his throws and leading his receivers on home run style plays down the field. He has very good footwork and continues to improve in this area and is able to hesitate and burst through openings and move the ball with his legs. An athletic prospect has good upside as a QB.