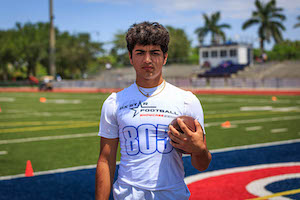 With the 2021 season set to begin soon, Six Star Football takes a look at several Prospects who shined this spring at the Six Star Football Florida Showcase in Fort Lauderdale and are putting together a big senior season this fall. 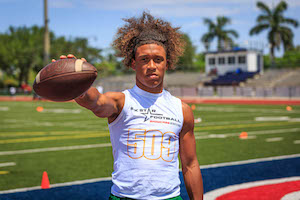 @Antonio_caito Space & Treasure Coast (Central)
An impressive talent and all-around athlete at QB who can make things happen with his legs and as a thrower. He is a smart player who processes information quickly and can get the ball out in rhythm. He is always looking for the best option and is good at reading defenses and looking for holes. He has been working on his overall ball placement and timing as a thrower and he also shows a lot of potential given his ability to move the ball on the ground, both in space where he can showcase athleticism and up the middle as he welcomes contact. He reports a 4.56 40 and a 33.4 vertical. 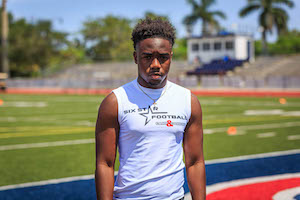 @Lcollins248 Broward (SE)
A confident and underrated thrower who shows good arm strength and the ability to thread a needle to receivers being double covered on crossing patterns. He is a mobile athlete who can extend plays with his legs and buy time in the backfield but is also able to move the chains on his own as well. He’s comfortable commanding things from the pocket as well and shows very strong ball placement on throws inside and outside the numbers. A player with a lot of natural talent and ability who can read a defense and distribute the ball well, a player who is currently flying under the radar in recruiting. He’s also a smart player off the field as well and he reports a 3.8 GPA.  Collins has drawn interest from a host of college programs, including Georgia Tech among others. 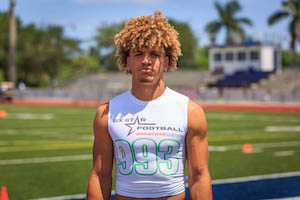 @QBbensonbarnes Palm Beach (SE)
Another underrated and productive all around athlete who can make things happen through the air and on the ground. He is an athletic playmaker who has the ability to make big throws across his body and is good at scrambling and finding his receivers and unlikely situations. He is constantly working on his frame through strength training and conditioning and it’s proving beneficial for his senior year as he looks stronger and is able to make throws with less effort and more zip. So far after three games he has 850 total yards and nine touchdowns. A smart player who steps into his throws and puts the ball exactly where he wants to.

@elijah_decastro Broward (SE)
A solid player who can get the ball out quickly to his skill players but is also able to stay in the pocket and make some plays down the field. He is a smart player who has dual threat abilities and he shows quick feed and the ability to find his way through a crowd. He is the type of player that can surprise opponents with his runs and has a good feel for where his lineman are and how to use them to make blocks. A solid player who has been working on his footwork and ball placement over the summer and shows improved overall arm strength on short and longer passing routes. 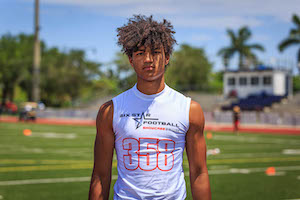 @joegilchrist__ Mid-Florida (Central)
A good athlete who can see time on both sides of the ball, Gilchrist is a dual threat QB with great size who brings power and speed to the field. He likes to sling the ball and can find his receivers in stride across the middle of the field but he has a lot of untapped potential in his game overall. He has a lot of power to his throws and can make it look easy when he drops back and scans the field. He’s comfortable with a variety of schemes and plays and he’s very difficult to bring down when he is improvising or moving the ball on design runs. A smart, big-framed athlete with a big arm.

@NasrBrian Miami Dade (SE)
Another underrated player at QB with an active arm who is able to process information and put the ball in the right spot in a variety of situations. He has poisoned the pocket and solid throwing mechanics overall. He can air things out on big plays down the field and is comfortable stepping up in the pocket and uses his hips well to throw. He has some mobility and some scrambling ability but he does his best work as a passer. A standout over the summer at numerous camps and combines who is able to show great repetition as a thrower. He throws a catchable ball for receivers and is constantly spinning an accurate ball that is smartly placed. 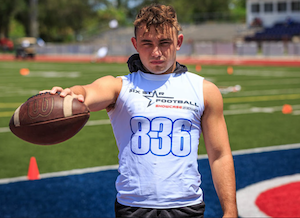 @Garnett_13 Miami Dade (SE)
A strong, athletic player who pushes himself physically. He is a well-balanced player who is able to operate from the pocket and can scramble and make throws across his body. He is also able to carry the ball for himself and shows good balance after contact and can stay on his feet and continue to drive forward. He can make big outside the numbers throws with a clean pocket but is also able to quickly get the ball into the hands of his skill players on screens and underneath throws and shows good vision and the ability to make a quick read on a defense. 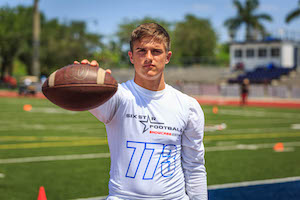 @GavinSavQB2 Mid-Florida (Central)
A tough, physical athlete who shows the ability to improvise and make strong throws on the move. He has great vision at his position and is able to work through his progressions well and shows solid arm strength as well. He commands the pocket well, able to drop back quickly and then explode off his back foot if he feels the outside pressure and then either move up in the pocket to make a throw or simply scramble in the backfield or even move the chains with his legs. He’s very productive and can hit his receivers at every level. He likes to hit his first option receiver but can work through his progressions and find receivers underneath and on the opposite side of the field as well.