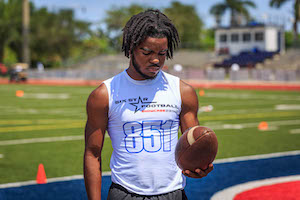 Here, Six Star Football takes a look at several of the top defensive back prospects to know in the 2022 class in the Daytona & St. John areas.

@LaTrae9 DSTJ (NE)
A multiple sport athlete who shows good speed in the ability to stay with opponents in one-on-one situations. He is a physical playmaker who has a scrappy ability to come up big and even force turnovers and come away with the ball. He can create some on his own both after an interception and as a special teams returner as well. He’s a physical player and has good strength for his frame and is very nimble and athletic and able to make things happen against taller athletes with great length. A player who is stepping up and showcasing. He currently holds offers from Keiser University, Stetson University and Webber International. He reports of 4.5 40-yard dash.

@Tyshawn_2 DSTJ (NE)
An impressive all around athlete who shows a great combination of speed and toughness and the ability to get to the ball carrier and stop a play. He’s a versatile athlete and one who can also see some time as a receiver or a return man and he shows good direction and is able to use his blockers and also just create for himself. That said, he is known for his work on the defensive side of the ball and is extremely productive and good at covering strong and taller opponents and is able to come away with the ball, make tackles, break up plays and even help his teammates finish plays and quickly get from one side of the field to the other. His junior year he recorded 70 tackles with four force fumbles and five tackles for loss. He reports a 4.6 40 yard dash has a 275 bench, 365 squat, 335 deadlift and a 225 clean.

@DominickFields8 DSTJ (NE)
Despite being out for the season, Bartram Trail 2022 Dominick Fields is a talented two-way prospect and leader who shows a lot of versatility and a strong mindset. He is a good athlete with good speed who is physical and able to track the ball well and knock away passes. He is good at getting from one side to the other and making tackles and is comfortable in one-on-one situations against strong opponents. Also has receiving ability and good hands and can make some high point plays as well. His senior season has been cut short with an injury but he shows a strong will and determination to stay focused as he continues his rehab and recovery. Fields is committed to Blinn CC.

@dreamchaser8_ DSTJ (NE)
A defensive back and free safety who has good athleticism and the ability to take away space from ball carriers and make some impressive hits. He shows good speed and rhythm to his position and has a strong and a durable frame. He has good speed and all around strength but is also very quick and is able to make athletic plays through the air. Is both a good run stopper and defender in one-on-one situations against talented receivers and has good hand-eye coordination and the ability to break up plays and even come away with an interception on his own. An underrated player in his class and at his position.

@rickersonjr DSTJ (NE)
An athletic and underrated player who is comfortable matching up against the opposing team’s best receiving option. He has good versatility overall and he’s very good at playing physical at a perfect moment, able to knock away the ball and break up passing plays with ease. He is a gamer, one who is able to come up pig through the air. He has great hands and good leaping ability and has a way of coming down with the ball that is all his own. He plays with good speed and timing and is one of the more underrated players at his position in the area. 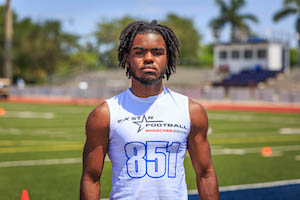 @isaiahrivers04 DSTJ (NE)
An improving defensive back who can operate both as a CB and does a safety. He has good speed and can get to the ball well and is able to play strong against physical receivers and break up plays through the air. A strong and muscular prospect who is also a weightlifting standout who understands how to use physicality well at his position. He can make contact as the receiver looks to complete the catch and is able to rip the ball away from opponents and even knock it down also a solid tackler who can get up and make plays close to the line but is also good in space as well. 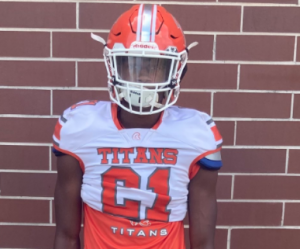 @JITRAW1 DSTJ (NE)
A smart, athletic prospect with a strong upside and the ability to impact the game in a variety of ways. He is a standout defensive back who can make electric plays through the air and come away with an interception or an impressive tackle. He is great at quickly cutting in front of receivers and coming away with the ball and is a very hard tackler and is great at targeting the ball on contact and forcing turnovers. A player who can do a bit of everything as he can quickly burst past opponents on special teams and is also able to operate as a ball carrier and receiving option if he needs to. Thomas has committed to play at Iowa State.
Photo courtesy @JITRAW1