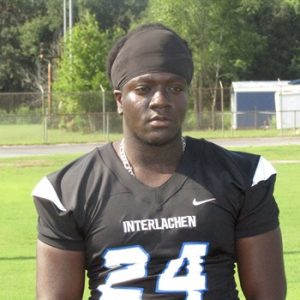 Here, Six Star Football takes a look at several of the top RB prospects to know in the 2021 class in the Daytona & St. John areas.

Travion Dixon, 5’10, RB, 2021, DeLand @_newera2
Dixon is an athletic and underrated playmaker with the ball in his hands who can find edges and then avoid DBs and safeties down the field. He reacts well when he feels contact and can turn up the speed or even spring his way out of tackles. A player with good size and muscle tone and shows the speed and creativity needed to burst through coverage and make strong moves in open space. He is good at going up the middle and pushing the ball down the field but he is at best in space showing off his athleticism. Dixon currently holds an offer from Tennessee Martin.

Duane Graham, 5’9, 179, RB, 2021, Menendez @DuaneGraham15
Graham is an explosive player who is capable of breakaway plays for massive gains. He is a quick player at 5’9, 179-pounds and he shows a good upside as a rushing prospect moving forward. Last season Graham ran for over 1,00 yards and had an impressive 14 touchdowns.He also averaged 320.9 yards per game showing the ability to break through tackles and score on big drives and he was also reliable on small gains, looking to simply move the chains and get to the end zone. An underrated and under recruited prospect who has a lot of potential and the frame and speed to show up game after game.

AJ Jones III, 5’10, 180, RB, 2021, Bartram Trail @AjIII6
A dual-purpose RB prospect who can shift and fake out opponents and find openings when it looks like nothing is available. He has a solid combination of strength, vision and athleticism and he can avoid contact in a way that usually gets a great reaction from the crowd. He can make plays as a receiver as well, showing versatility and great hands. A player who has the skill set and all the tools needed to make a splash at the next level. A leader on and off the field who understands how to impact a game in a massive way as an offensive playmaker.

Chris Chalyn Parks, 5’9, 175, RB, 2021, Flagler PC @chrischalynp23
An extremely quick player who has good footwork and an eye for openings. He has the ability to operate as a rusher and a receiver, showing a strong leaping ability and the hands needed to bring down passes. He is algo good at finding separation and is great at getting to the edge and then running around defenders looking to wrap him up or go for his feet. A 5’9, 175-pound playmaker who has good upper body strength and balance and a frame that has not maxed out yet physically, although he is tough and muscular for his size. He reports a 350 bench, a 4.2 shuttle run, a 34‘ vertical and terrific straight line speed.

Marcus Perry, 5’11, 181, RB/OLB, 2021, Deltona @MarcusPerryJr
A do-everything player who can make tackles, find openings and make big catches down the field. He’s an athletic player who runs hard and can get to the ball and make plays. He can force stops on his own and is good at getting to the ball quickly and can help his teammates wrap up opponents. He hits hard and has good instincts, showing up on both sides of the ball.  He can make plays with the ball in his hands as well, a versatile player who looks to make power plays. Perry has a 4.7 40 yard dash, a 205 bench, a 345 squat and a 195 deadlift.

DJ Polite, 6’1, 210, RB/OLB, 2021, Interlachen @DjPolite3
A confident and sharp player who can dominate on both sides of the ball. He is a strong and powerful player who is good at tracking down opponents, often going from one side of the field to the other to make tackles. He’s good at using his weight and strength but also has impressive speed for his frame. Polite is listed at 6’1, 210-pounds and he appears larger than listed. He is a great rushing option for his team who can run through tackles and find his way down the sideline and into the end zone. He has good hands as a receiver and can maintain control on contact. A multiple sport athlete who looks to fight and make a splash wherever he can.

Faizon Sutton, 5’11, 190, RB, 2021, Interlachen @faizon_sutton
Sutton can shuffle his way through strong coverage, has a lot upper body strength and can find openings and capitalize on them. He’s listed at 5’11, 190-pounds and he shows the speed on the outside. He can power his way through coverage and looks to run and fake out opponents. Also a receiving option who can make good catches underneath and then make positive gains after the catch. But he’s a hard-nosed player and shows the athletic spark that can catch opponents by surprise on occasion. He currently holds an offer from Warner University,