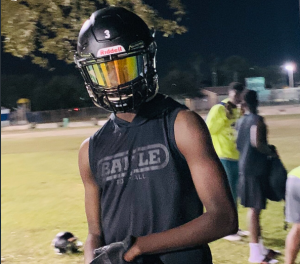 Here, Six Star Football takes a look at several of the top safety prospects to know in the 2021 class in the Daytona & St. John areas.

Zeke Adkins, 5’11, 185, SS, 2021, Spruce Creek @ZekeAdkins13
A timely player and leader who is good at covering multiple areas and making it difficult for QBs to lead receivers when he’s down the field. Adkins is a solid playmaker at 5’11, 185-pounds who hits hard and looks to target the ball when tackling a rusher. He is capable of forcing turnovers and can maintain his line of sight and the receiver and get to the ball and force interceptions as well. An underrated and often overlooked player in the recruiting world who zips to the rusher and can slip by blockers and make strong tackles which often stop opponents on contact.
🎥  https://www.hudl.com/profile/11370565/Zeke-Adkins

Joshaun Grier, 6’3, 180, FS, 2021, Spruce Creek @jgr1er
Another extremely athletic and underrated prospect for Spruce Creek who can weave his way through coverage and get to the running back. He has a strong frame and great length and can challenge receivers through the air. He has good hands and footwork and a strong rhythm and a lot of potential in his game given his overall frame and length and skill set. He makes good decisions and he is constantly improving his game. Grier has a lot of intangibles that programs look for in an athlete and he fills out the position quite nicely.
🎥https://www.hudl.com/profile/11562716/Joshaun-Grier 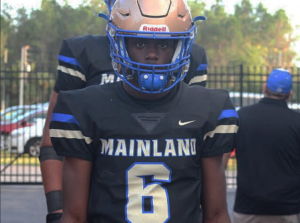 Charles Reid, 6’1, 170, FS, 2021, Mainland @snipergangmeg
Reid is a strong and dynamic player who can get to anyone on the field and make plays. He is good at making tackles on his own and has a high productivity rate when he’s on the field. He is also good at deflecting passes and making receivers work for everything they can get, often coming away with an interception and making some moves after the catch. He’s an extremely quick and mobile player who has impressive speed and in-game quickness and the athletic build programs look for. Reid records a 4.4 40-yard dash and has a 30-in vertical, a 225 bench and a 415 squat. He holds offers from Savannah State, Georgia Southern, UT Martin and Buffalo and has received a lot of attention from a variety of other programs.
🎥   https://www.hudl.com/profile/11508432/Charles-Reid

Targon Ridley, 5’10, 175, SS/RB, 2021, St. Joseph’s @TargonR1
As underrated as they come on both sides of the ball, Ridley is an impressive and explosive athlete who can and often burns opponents with his laser speed (4.5 40). He has the ability to react before opponents can change their positioning. He has a strong vertical and can get up and make plays through the air both as an intended target and as a defensive threat. He is dynamic with the ball in his hands and is extremely difficult to catch up with once he has a path in mind and is looking to create and get up the field. He hits hard and with purpose and shows a high IQ and the athleticism that translates at the next level. The kind of player you don’t want to bet against.
🎥   https://www.hudl.com/profile/11889414/Targon-Ridley

Najei Snyder, 5’11, 165, ATH/S, 2021, Deland @Najei9
Call him an athlete because Snyder is more than just a one position player. He has good size at 5’11, 170-pounds and he can use his creativity and athleticism in a variety of ways on the field. He has great footwork and has a high ceiling given his quickness and straight line speed after the catch. A player who can create with the ball in his hands and has the ability to run through open areas before defenders have a chance to collapse on the ball. Snyder is a promising defensive prospect who is great at playing physical and can lay out opponents and force turnovers on impact. Also a standout student who reports a 3.8 GPA.
🎥https://www.hudl.com/profile/6396843/Najei-Snyder