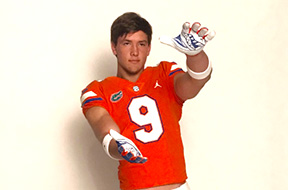 Florida’s First Coast area features several of the state’s top prospects at a variety of positions across the board. With the season underway, Six Star Football is taking an inside look at the prospects college programs are looking at this season.

Here, Six Star Football takes a look at several of the top defensive end prospects to know in the 2021 class in the First Coast area.

David Adewale, 6’3, 235, DE, 2021, Bolles @David_O_Adewale
An Air Force commit who has good strength and the ability to go up against double teams and stay with the play until the end. He has good size and great length and can operate well off the edges and he can throw opponents back and take the ball carrier to the ground. The kind of player that opponents often struggle with slowing down when he’s locked in and ready to make plays. Last season he recorded 28 solo tackles, 23 assists, had nine tackles for loss, 7 QB hurries and five sacks. He also had one forced fumble and one fumble recovery. Before announcing his commitment he held offers from Dartmouth, Yale, Bucknell, Tennessee Martin, Eastern Kentucky, Army West point and Holy Cross to name a few.
🎥 https://www.hudl.com/profile/9659462/David-Adewale

Nick Elksnis, 6’5, 220, DE, 2021, Episcopal @NickElksnis
An elite prospect who has all the tools you look for in a playmaker. He is aggressive and shows great timing and rhythm and adds a great combination of speed, athleticism and a high IQ for the position. He can break up plays and get to the ball and is constantly flying around the field and coming hard off the edge. An elite player who has all the tools to make an impact at the next level. Before announcing his commitment to Florida, Elksnis received offers from Ohio State, LSU, Maryland, Mississippi State, UCF, West Virginia, Tennessee, Penn State, Michigan and Miami to name a few.
🎥  https://www.hudl.com/profile/9579297/Nick-Elksnis

Elijah Franklin, 6’3, 230, DE/LB, 2021, Episcopal @ElijahF904
A hard-working and underrated prospect who has a strong skill set and the ability to swallow up rushers and take them to the ground. He’s a large prospect at the position and shows great speed for a player his size. A 6’3, 225-pound player who explodes on film and can sniff out a scheme and be ready to make a tackle in a moment’s notice. Franklin sees time as an inside and outside linebacker and is also a strong defensive end prospect as well. He just makes plays and he looks good on film and has a high IQ and he shows promise and a developing skill set and the force and power that college programs look for.
🎥 https://www.hudl.com/profile/11534233/Elijah-Franklin

Langston Hardy, 6’3, 220, DE/OLB, 2021, Episcopal @Langstonhardy
Another extremely productive player who has a high ceiling and great speed and physicality. Hardy has good size and a strong build and can push his way through tackles and guards when he’s placed inside. It doesn’t matter where he’s at, he is looking to play aggressive and throw opponents to the ground. He’s a motivated prospect that likes to get in the pocket and make tackles on the ball carrier before they have a chance to cross the line. Last season he recorded 49 tackles, 9.5 sacks and an impressive 18 tackles for loss. Before announcing his commitment to the University of Connecticut, Hardy held offers from Wake Forest, Maryland, Toy, Georgia State, Marshall, Cincinnati, FAU and Liberty to name a few.
🎥 https://www.hudl.com/profile/9842733/Langston-Hardy

Elijah Harris, 6’1, 210, DE, 2021, Lee
A speedy playmaker for Lee who looks to use his athleticism and twitch to find separation and get to the backfield. He’s an underrated prospect and he is quick off the line and looks well in open space as well. Harris can track down players from behind and can get from one side to the other with strong timing and a lot of force. A smaller prospect at the position at 6’1, 210-pounds, but is extremely active and productive and shows out against strong competition.
🎥 https://www.hudl.com/profile/9681944/ELIJAH-HARRIS

Donovan Henry, 6’4, 250, DE, 2021, Yulee @Lilhenry56
A good sized player who has speed, toughness and the ability to see through traffic and make the necessary adjustment to get to the ball carrier. Henry can push opponents out of the way and is strong in one-on-one situations and can even come away with an interception on the rare occasion he jumps out at the ball. A player who continues to develop and increase his size and power while maintaining good speed. He can also see some time as a TE, but he is at his best on the defensive side of the ball. Henry currently holds an offer from Ottawa University.
🎥 https://www.hudl.com/profile/9227144/Donovan-Henry

Marquise Newman, 6’2, 240, DE, 2021, Raines @MarquiseNewman1
A hybrid DE prospect who has speed, toughness and a strong skill set moving forward. He has a lot of experience and a state championship to prove it. Newman is a big player for Raines who has long arms and big hands. A physical player who can get to the backfield and one who shows real burst and good upper body strength as well. He can push opponents out of his way and can use his athleticism, fighting through contact in search of the rusher. He also reports a 4.75 shuttle, 5.3 40-yard dash and a 300 bench and a 405 squat.
🎥 https://www.hudl.com/profile/11044492/Marquise-Newman

Jai Robinson, 6’3, 215, DE/TE/P, 2021, Lee @JaiRobinson19
An extremely versatile athlete who shows up as both a standout punter and defender. Robinson is a physical athet who continues to work on his strength training and conditioning and has a good upside as an athlete. He’s an explosive athlete who has great speed, size and overall control of his game. An edge rusher who plays hard and gets to the QB. He shows great vision and timing to his hits and can be counted on to make plays in tight coverage and in open space when opponents have room to create and sell fakes. Robinson currently holds offers from Notre Dame College, Austin Peay and Defiance College.
🎥 https://www.hudl.com/profile/9636284/JAI-ROBINSON 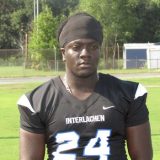