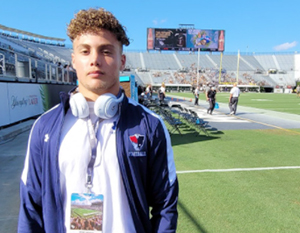 STOCK RISERS | A look at several of Orlando’s rising LB prospects (2023) – We look at some of the top play makers linebackers of the Orlando area in the class of 2023 to know, seniors to be that have been big junior leaders in 2021 and guys jumping onto some college radars with their outstanding middle defense play.

@Braydan_13
One of the starting linebackers coming back and ready for a huge senior season at Harmony is Brayden Adams, Adams, 6-0, 175 pounds, is a class of ‘23 play maker that can also be a DB and be a nice coverage play maker also, along with being that closer at outside linebacker that maintains the edge well and is a player that loves to come up and be a big time hitter, with speed. Adams, who recorded 66 tackles and nine tackles for loss with a pick six, is a guy that stops the big plays on the outside edge and can come up against the run and make some key stops as well.

@m6tthiew
One of the linebackers that we like to be a major breakout athlete in 2022, this guy is a very impressive powerful frame at linebacker for Osceola and has all the potential to be one of the best senior risers on the radar for this impressive with talent club at Osceola. His powerful and very athletic frame should bode well for a big season ahead, could end up being a 45 plus tackle backer in 2022 for Osceola’s defense.

@MosesEzechi
A pure menace on the defensive side of the football for Jones High, Ezechi could be the most athletic linebacker in Orlando and certainly has been one of the top play reading machines out there, a big time tackler, one of those backers that has backed  it up on the football field also, Moses posted a big time junior season in 2021 with 54 tackles in 12 games, averaged 4.5 tackles per game, had 29 solo tackles and 25 assisted tackles on the season. Also a standout student, Ezechi reports a 4.0 GPA.

@JrFamularo
Anthony is one of the top rising prospects to know coming up in the ‘23 class, a 6’1, 217-pound well built play making linebacker at Freedom that reports a 4.59 time in the 40 yard dash. Famularo is among the top speed LBs in the city or Orlando and is a player on a mission and plays that way on the football field as well.  Also a special teams warrior that is very tough and physical and a player you love to have on the football field to make some huge plays happen for the team, Famularo has also played some DE at the high school level.. He has drawn interest from Middle Tennessee State, Dartmouth, Central Florida among others. Also a standout student, Famularo reports a 4.5 GPA.

@HudsonGibbs8
Excellent speed and a power hitter, this hybrid backer and safety is a player that has both the speed and powerful hitting that his coaches love to see, Gibbs reports a 40 yard dash time of 4.60 also, no doubt a very rangy and athletic backer that can make plays all over the football field and did just that in 2021 with a big time junior campaign as he recorded three TDs, 4 forced fumbles, an interception, four fumble recoveries, 28 solo tackles and 71 total tackles. Big time play maker to watch out for in the 2023 class who recently picked up his first NCAA Division I offer from Northern Colorado. Also a standout student, Gibbs reports a 4.4 GPA.

@JeremyM3838
At 6-3, 230 pounds Miller could be the most college ready frame at backer in the Orlando area and has also proven to be one of the best play makers and leading tacklers in the middle as a hot junior play maker in 2021. Miller played in 12 games last season and helped OCP finished the season 10-2 and advance to the state semifinals. He had 61 tackles , six sacks, 13.5 tackles for loss and two fumble recoveries and was a play maker that was both powerful and one of the top guys for being a cover the entire field middle man in the Orlando area, big time things are ahead for this big man that is tough to handle for offenses.

@joshuam19783343
One of the top tackling machines in the Orlando area, Moss really has made a big time name for himself as one of the top linebackers in the Orlando area for the program at Harmony, Moss racked up a nine game total of 79 tackles this  past 2021 season and is a player that averaged 8.8 tackles per game, and had 20 solo and 59 assisted tackles as the key middle man and leader of the defense this year,  no doubt this guy is one of the hottest backers coming out of the Orlando class of ‘23.

@icebucket_jay
A standout basketball prospect who has already dawn several offers from college programs to play at the next level, Edgewater 2023 Jaylen Smith is a prospect that saw some time at linebacker for Edgewater in 2021 and could emerge as a key senior coming back as a top play maker. Smith has the speed to be able to cover the field from sideline to sideline and can drop back into pass coverage as well. 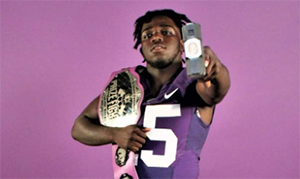 Keelan  Smith, 6-1, 215, LB, 2023, Edgewater @Keelansmith04
One of the most impressive athletes overall, this guy really has all the makings of being a big time college football player and is a player that is very aggressive and a go all out type of play making linebacker for Edgewater High School, Smith is a play maker that had a 26 tackle season in his nine games this year and has all the skills and potential to be a 50-70 tackle senior with a big 2022 expected for this talented man in the middle. He has drawn interest from several college programs, including Kansas State, among others.