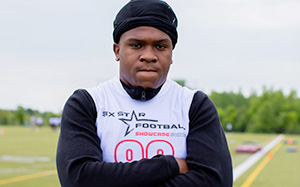 With the 2021 season underway, Six Star Football takes a look at several 2022 versatile prospects who are raising their profile through the early stages of the season this fall.

Luke Allgeyar, 6’4, 240, DL, 2025, MICDS
Blessed with a frame that is mature well beyond his years, MICDS 2025 Luke Allgeyer opens the 2021 season as one of the state’s most impressive young defensive linemen and is already making an impact for the varsity squad as a ninth-grader. While he didn’t put up big numbers in his varsity debut against a talented SLUH squad on Friday, Allgeyer did a good job of helping force runs back into the heart of the defense as he maintained outside contain well from his defensive end position. At 6’4, 240-pounds, Allgeyer already has the size necessary to compete at a high level and he is poised to put together a big freshman season.

Mikell Burden, 6’2, 200, DE/WE, 2025, Cardinal Ritter
A solid athlete who has good size and length. He’s listed at 6’2, 200-pounds and he shows the ability to use his frame well on both sides of the ball. A big player for his grade who shows good hands and good confidence and he is capable of breaking away for some big plays over the top. He is able to find separation in his routes and can make the most of limited targets and really make a splash as a receiver. A nice playmaker who is just getting started and has already shown some real potential in his game with the ball.

@Colin2tough_33
A nice hard-working prospect to keep your eyes on who shows good size and versatility as an athlete. Listed at 6’2, 200-pounds, Griffin is a strong player with good footwork and has some upside as a receiving option as well as a defensive end/linebacker. He has been working on his footwork and his receiving routes over the summer and shows good upside as a prospect in his class given his frame and ability. Has good hands and he understands his game and how to put himself in a position to make a play.

@keylanlagrant
LeGrant is a strong and well-built prospect at 6’3, 215-pounds. It’s even more impressive when you realize he’s a 2025 athlete already seeing time and making plays. He has great muscle tone and thickness to his frame and he is very tough for even experienced tackles to hold back. Shows a lot of intensity and power in his game and can push and drive opponents back as he applies strong pressure to the pocket.

Amon Lee, LB, 2025, Hazelwood Central
Lee is a solid athlete to keep your eyes on who can read a play and then make tackles. He’s been able to see varsity action and is learning well and shows good playmaking skills. He hits hard and has good speed and can get to the backfield and pressure the QB and even make tackles for a loss. A tough and good energy player who is learning and improving and shows some future as a defender and could see time in other ways due to his athleticism.

Ben Long, 6’0, 170, ATH/DB, 2025, Lutheran South
A talented athlete who has good speed and the ability to make an impact in several ways. He is a strong and scrappy player who is physical and shows good energy and a solid feel for anticipating routes and RBs. He is a tough player who knows how to get out and make an impact quickly from the start. He has good hands and speed and can also see time as a receiving option as well. Long tallied 10 solo tackles in the week one game against Affton and 12 total for the game. He then went on to record 11 tackles the following week against Principia and had four receptions for 60 yards. A young player who is already active and making some noise and will likely continue to see time.

@MekhiMixon3
Already a standout prospect in his class, Mixon is an impressive overall athlete who shows great timing and good force to his tackles. He is great at reading plays for his age and shows a good IQ and a high ceiling as a prospect. He can stop the ball on the ground and is able to get to the backfield and make tackles but is also capable of playing against receivers and knocking away the ball. Shows a lot of athleticism in open space situations and is good at stopping the ball carrier and taking away space and then delivering some impressive hits.

@saul_spurgeon
Glendale 2025 Saul Spurgeon has made an immediate impact this season on the defensive line for the Falcons, playing an interior defensive lineman spot and helping shore up its run defense. At 6’3, 325-pounds, Spurgeon has a big frame but has some bounce in his step for a big athlete as he shows the ability to move well in short spaces and has the strength necessary to compete against older, more experienced offensive lineman. Spurgeon is one of several young players making an immediate impact this season for the Glendale defense.