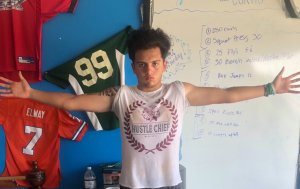 Angel Alverio, 6’1, 225, MLB, 2021, Ida Baker @AngelAlverio5
A multiple position prospect who can see time on both sides of the ball and can operate as a carrier, tackler, and blocker. Alverio is extremely motivated wherever he’s placed and brings great energy in a strong work ethic and the ability to adapt to any situation that comes his way when he’s on the field. He is a strong run-stopper up the middle who can power his way back and he also has good hands and can intercept the ball and gain some yards on the other end given his creativity with the ball, his vision and his underrated speed. Alverio is also a standout in the classroom and he reports a 3.8 GPA.
🎥  Film: https://www.hudl.com/profile/10263789/Angel-Alverio

Camerin Camacho, 6’1, 200, MLB, 2021, Island Coast @C4M_21
An all-state, all-area prospect a year ago who has good hands and can read a quarterback extremely well. A 6’1, 200-pound middle linebacker who commands center field and shows good footwork and technique and has good timing as well. Camacho is good at targeting the ball and can punch it out of his opponents hands and can lay out opponents as well. Last season he had 80 tackles in 8 games and one interception and three forced fumbles. He has a way of getting to the ball quickly in the backfield but is also comfortable making plays on the open field and we’re both carriers have room to operate an attempt to make opponents miss. He currently holds offers from Lake Erie and Whittier College. Also a standout student, Camacho reports a 3.7 GPA.
🎥  Film: https://www.hudl.com/profile/9859210/Camerin-Camacho

Shawn Bingham Jr, 6’1, 187, MLB/TE, 2021, Hernando @Shawn_bingham81
A triple jump regional qualifier and an explosive athlete on the football field as we. Bingham is an underrated prospect who can get to the quarterback and force him out of the pocket and even track him down from behind. He explodes off his back foot and reads plays well and can get up and greet the ball and receivers through the air before they know what happened. He has in-game quickness and strong twitch and has potential as an athlete moving forward. Bingham has been posting some workout sessions on social media this offseason and shows specific attention to strength training, his footwork and overall conditioning. The videos highlight his quickness and terrific footwork. Last season he had 62 total tackles (36 solo) and 6 tackles for loss. He benches 190 and squats 375.
🎥  Film: https://www.hudl.com/profile/8060239/Shawn-Bingham-Jr

Amir Burgess, 5’11, 220, MLB/RB, 2021, Pasco @amir_burgess 1
A powerful linebacker who has the ability to take opponents off their feet and force them to lose possession of the ball. He’s a physical and imposing player who hits hard with little room to breathe and even harder when he has time to gain momentum and speed. Burgess is listed at 5’11, 220-pounds and has a solid and tone frame. He’s the kind of player opponents usually struggle to find their way out of his arms as he can lock down and be difficult to avoid when he’s going for the ball. A player who is flying under the radar in the area. In August, Burgess picked up his first offer from Whittier College.
🎥  Film: https://www.hudl.com/profile/9632289/Amir-Burgess

Will Constantine, 6’2, 205, MLB, 2021, Cypress Lake @WillC_42
Constantine is a solid and agile defensive standout who can also see time as a ball carrier, a blocker, a receiving TE and a special teams performer. He has solid size at 6’2, 205-pounds and can bully his way through contact and move the chains in a variety of ways. He is a sure tackler in space and he hits hard and he looks to knock the wind out of his opponents. He’s physical and aggressive and looks to Target the ball when he tackles and puts as much pressure as he can on the ball carrier’s arm in an attempt to force a turnover. He is a balanced player and one who is comfortable performing as often as he can on both sides of the ball and is willing to sacrifice himself for the better of the team. Also a standout in the classroom, Constantine reports a No 8 class ranking out of more than 400 students, a 3.91 GPA and has a 1230 SAT score. He recently picked up an offer from Carleton, Allegheny, Albright, Cobber, Ursinus, Rose Hulman and has drawn interest from several others.
🎥  Film: https://www.hudl.com/profile/10972082/Will-Constantine 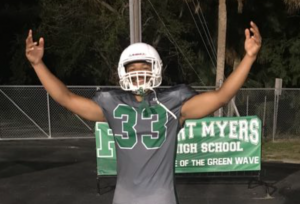 Greg Dennard, 5’11, 210, MLB, 2021, Fort Myers @DennardGreg
Also a wrestling standout, Dennard has a good upside as an athlete and shows a lot of raw skill and power. He has good technique and footwork and has strong hands and can push opponents back and knock them to the ground and get to the ball. A 5’11, 210-pound all-around prospect who has good upper and lower body strength and shows a flexible nature and an ability to contort his body and get to the ball carrier and knock them off their feet. He runs hard and can cover passing plays and stay with skill players and knock down the ball.
🎥  Film: https://www.hudl.com/profile/10977220/Greg-Dennard

Keenan Mullins, 5’10, 195, MLB, 2021, Barron Collier @mullins_keenan
Will look to be an impact maker and team leader as a senior for Baron Collier in the middle of their defensive core.  Mullins is a player that can jump right into the mix of things and finish tackles off very well.  Mullins is a player that likes to put his nose right into the action to make key stops in the middle.  A year ago, Mullins showed the ability to make reads without hesitation and recorded 17 QB hurries. He reports a 4.9 40, 296 bench, 450 squat and 415 deadlift. Mullins is a player that always seems to be right around the action and looks for an impact season in 2020.
🎥  Film: https://www.hudl.com/profile/12732844/Keenan-Mullins 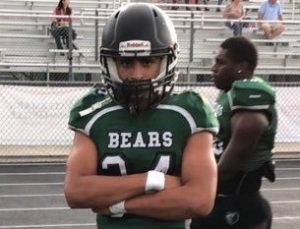 Jean Perez, 5’11, 210, MLB, 2021, Palmetto Ridge @Jeanperez34
Perez has one of the more athletic player builds among Florida backers, a lean and mean presence in the middle for Palmetto Ridge.  Jean is a player that shows he can that reacts well to the action and can close in a hurry.  One of those players that is good at making the plays as a downhill backer and a guy that has the speed and built to be a backer that will get nice college looks.  Has received an offer from Methodist University.
🎥  Film: https://www.hudl.com/profile/10976132/Jean-Perez

Richard Spade, 5’10, 191, MLB, 2021, Fivay @RichardSpade56
Runs a 4.8 in the 40 yard dash and has some nice speed for a middle man and play maker at Fivay.  Spade is a player that shows he can be one of the most physical play making LBs out there and is considered a hard hitting pop you in the mouth type play reader and one of those guys that also shows active footwork and has the ability to make his presence known as backer that can drop back into pass coverage and be very effective.  Tough player that is powerful and talented and very smart as well.  Spade is one of the best looking stock risers at MLB in Florida right now.
🎥  Film: https://www.hudl.com/profile/11569647/Richard-Spade

Jaelin Willis, 6’0, 205, MLB, 2021, Bishop Verot @jaelin_willis
One of the guys that has really gained more and more attention and is taking off as an elite type play maker.  Willis is a player that has shown he excels at making it hurt, a guy that demolishes that ball carrier and one of those guys that takes pride it hard hits and bone jarring tackles for Bishop Verot,  Willis shoots the gaps very fast and is one of the best looking play readers and among the hardest hitters in the state. He was an all-district performer last year with 88 total tackles and 66 total tackles. Willis reports a 4.7 in the 40 yard dash and reports a 280 max bench, and 425 squat.  Keiser and Baldwin Wallace has offered Willis so far.
🎥  Film: https://www.hudl.com/profile/9859225/Jaelin-Willis