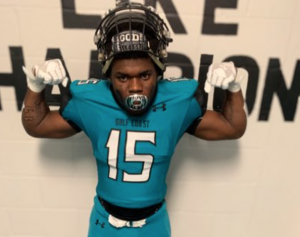 Daniel Cardoza, 5’8, 185, OLB, 2021, Immokalee @DanielC69943097
Cardoza comes from the tradition rich Immokalee program and will look to be one of their impact makers in defense from his OLB spot in 2020.  Daniel is a player that has shown that he can use power and pop to finish tackles off.   Shows some fine speed, plays some running back as well and is one of those players that seems to have a knack for making good plays at key times. One to watch for and a senior that Immokalee will look to make an impact in 2020.
🎥  Film: https://www.hudl.com/profile/10877771/Daniel-Cardoza

Grady Clower, 6’1, 210, OLB, 2021, Wesley Chapel @ClowerGrady
A multiple sport standout who has good speed and strength for his frame. Clower has good size at 6’0, 195-pounds, and is good at jumping out and stepping in front of targeted receivers along the sidelines. He has the ability to operate at multiple positions, including safety, receiver and tight among others. He’s physical and has good lateral movement and footwork and can wrap up an opponent and ball carrier and take them to the ground with Force. Although he looks good as a run stopper, Clower performs at a high-level when covering pass plays. He can go stride-for-stride with receivers and is good at forcing the ball out of their hands and stealing them off completely and taking them out of play. Also a strong student in the classroom, Clower reports a 3.4 GPA.
🎥  Film: https://www.hudl.com/profile/9601259/Grady-Clower 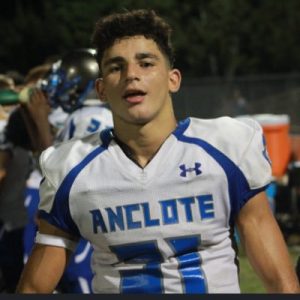 Thomas Crawford, 5’8, 165, OLB/RB, 2021, Anclote @t_crawford21
A strong and athletic two-way player who can operate as a ball carrier, a run stopper and also a solid and creative special-teams return man. Crawford has great vision for his size and has a way of creating his own opportunity. He can make opponents miss in tight spaces and in open field situations and can get up the field quickly and maintain control of the ball after contact. He keeps an eye on the play and looks to jump out and take away the ball or make strong tackles and force opponents back. He’s athletic and has good twitch and rhythm and shows a strong upside as an athlete. A solid all-around player who reports a 4.65 40 yard dash.
🎥  Film: https://www.hudl.com/profile/12759373/Thomas-Crawford

Jimmy Dedonato, 5’9, 145, OLB, 2021, Cypress Lake @DedonatoJimmy
That backer that will knock you out with hits hitting power, at 145 pounds he hits like a 200 pounder and has good closing speed plus he has the speed and the ability to drop back in pass coverage and be an effective extra DB type player.  One of those guys that always seems to find a way to make play after play.  A guy that is smart and a guy that goes all out and is always looking for the next blowup type hit to fire his team up.
🎥  Film: https://www.hudl.com/profile/10990206/Jimmy-Dedonato 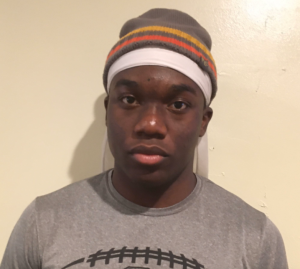 Beniah Eugene, 5’10, 175, OLB/S/RB, 2021, Golden Gate @benaiaheugene_ 1
A nice defensive player who can operate as a DB, an LB and also see time as a ball carrier on offense. Eugene is great at sniffing out of scheme and can leave his man and work his way through tackles and get to the quarterback or ball carrier in the back field. A physical player who shows the toughness and inability to just make tackles when he needs to. He can cover passing plays well and can get up and knock down passes and keep receivers humble in one-on-one matchups. A player who spends a lot of time in the weight room and he reports a 225 bench, a 235 power clean and a 335 squat.
🎥  Film: https://www.hudl.com/profile/9637574/Benaiah-Eugene

Kase Garcia, 6’0, 186, OLB, 2021, Ida Baker @kase_garcia
Brings a lot of emotion to the Ida Baker defensive unit on a team that really looks to have a lot of talent entering the 2020 season.  Kase is one of those backers that has shown he can be very effective at using his 478 speed off the outside edge to track down and make keep stops.  Garcia is a player that can use physical toughness and power to rough up the ball carrier and send a message to the offense when he makes a tackle or a big stop.
🎥  Film: https://www.hudl.com/profile/10263786/Kase-Garcia

Hubert Jean-Baptise, 5’11, 200, OLB, 2021, Gulf Coast @hurbert46002567
One of those guys that really has that physical and athletic  body as a OLB for enforcer for Gulf Coast.  Jean-Baptiste is a player that really is good at blowing up plays for big plays using some great looking speed.  Hubert is a player that is very difficult to get in front of and make key blocks on.  His speed is that of a DB and is a backer that can chase a WR down and make big stops from several yards behind. Jean-Baptiste reports a 4.72 40-yard dash time and an 11.7 100.
🎥  Film: https://www.hudl.com/profile/9353949/Hurbert-Jean-Baptise

Sheldon Marcelle, 6’2, 215, OLB, 2021, Anclote @1023Sheldon
Marcelle is an athletic linebacker who is great at reading plays and getting to the backfield and bringing down quarterbacks and running backs for a loss of yardage. He has great length for his size at 6-2, 205-pounds and can get a hand on throws and can cover receivers well. He’s an underrated prospect in the area and brings a nice combination of speed, toughness and athleticism to the field. Marcelle has great hands as well and he can get up and make plays through the air and even come down with the ball himself. He’s a physical and athletic do-everything prospect who looks to set the tone for his team and provides great leadership and production whenever he’s on the field.
🎥  Film: https://www.hudl.com/profile/12761493/Sheldon-Marcelle

Dominic Marino, 5’9, 185, OLB, 2021, North Fort Myers @dominic_marino
Runs a 4.83 in the 40 yard dash and has a 27 inch vertical for North Fort Myers and is a player that will look to be a key impact man in the middle in 2020.  Marino is a player that can really get off the snap very well, quick feet and a backer that has nice closing speed and the ability to catch players from behind.  One of those guys that is very active and always hustling and working very hard.  His speed and tenacity looks to take him a long way and is a guy for sure worth taking some big looks at for the next level.
🎥  Film: https://www.hudl.com/profile/10990250/Dominic-Marino

Johnathan Munson, 5’11, 180, OLB, 2021, Labelle @johnathanm12214
A guy that has shown the ability to play both middle and outside backer, one of those guys that has good closing speed for a middle man and is a player that can use good football IQ and patience to make the play, a good play reader and a guy that on the outside can close quickly after the catch has been made.  One of those underrated players at backer that will be looking for a nice 2020 season ahead. A year ago, Munson recorded more than 70 tackles. He reports a 250 bench and 330 squat.
🎥  Film: https://www.hudl.com/profile/10241699/Johnathan-Munson

Jesse Spencer, 6’2, 200, OLB, 2021, Fort Myers @jessespencerr24
An impressively built backer at 6-2, 200 that is big and powerful with a 250 pound bench press. A guy that always seems to be forcing the big turnover and is always around or being the creator of action for the defense.  A guy that has good speed and is a smart play maker that is always working and playing very hard and with his size at 6-2, 200 is powerful as well and a strength guy on the field that can hit you with some major power.
🎥  Film: https://www.hudl.com/profile/10977405/Jesse-Spencer

Jake Sundall, 6’0, 210, OLB, 2021, Gulf Coast @SundallJake
Very versatile player on defense that can play all over the football field, Sundall is a player that play  OLB, MLB or safety, a speedy play maker that is tough also and a key asset to Gulf Coast.  Jake is a player that can use some very good looking closing speed, once he gets there he uses all his 200 pounds to be a major hitter and a guy with some explosive power upon impact.  Also shows he has no problems fighting off blocks on the edge and still making the tough plays and big plays.
🎥  Film: https://www.hudl.com/profile/9888893/Jake-Sundall

Hunter Yeager, 6’0, 190, OLB, 2021, Fort Myers @HunterYeager3
An underrated prospect for Fort Myers who runs hard and can play sideline-to-sideline. He can make plays with his feet and shows the ability to catch up with opponents from behind or take them out from the side. Yeager keeps his eyes on the ball and is capable of tracking down the quarterback in forcing him out of the pocket and into an undesigned run play. He’s listed at 5’11, 190-pounds and he is patient and can let the play develop and take form before he goes out and makes contact.
🎥  Film: https://www.hudl.com/profile/9699597/Hunter-Yeager