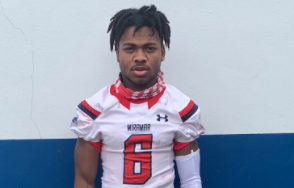 The upcoming offseason can be critical for rising ss looking to take their game to the next level. After putting together a strong campaign in 2020, these prospects are among many in the rising 2023 class to watch this spring and summer as they gear up for their junior season. Already several prospects have caught the eye of college programs, either picking up Division I offers or have drawn significant interest.

Here, Six Star Football takes a look at several rising RB prospects in the 2022 class out of the Broward area who are raising their profile this offseason. 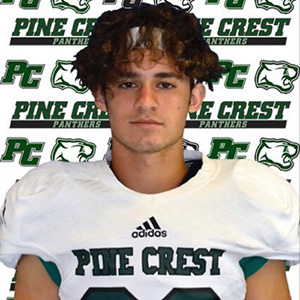 Nicholas Amunategui 5’8, 165, RB, 2022, Pine Crest @nickamunategui
A quick downhill runner who has the ability to push his way down the field. Amunategui shows a nice feel for the position and he understands his frame, his speed and he knows how to get the most out of it he can. He has physicality and finesse and he plays hard and looks to give it everything he has as a ball carrier. A player who can avoid contact but is also capable of absorbing it and continuing to drive the ball down the field. A breakaway style running back straight down the middle of the field.

Method Bradley, 5’10,160, RB, 2022, Dillard
A tough, hard-nosed prospect who can play physical and push his way through contact. He is an athletic player with good ability and good size as well, he has long strides and can cover a lot of ground with each step. Bradley can make maneuvers in contact situations and can break away and even come out of some clogged situations and then turn on his speed. He shows upside and good instincts at the position and he understands how to find openings and squeeze through the seams.

Anthony
Hankerson
RB | 5'7" | 185
St. Thomas Aquinas | 2022, 5’7, 185, RB, 2022, St. Thomas Aquinas  @Hankk_22
Hankerson is an elite prospect who shows great balance, speed and control. He is a physical player for his size and has great athleticism and the ability to juke opponents and continue down the field untouched. He’s also physical for his size and position and can pop off hits and continue to roll down the field. He has picked up a variety of offers from elite programs which include Miami, Georgia, Pittsburgh, Kansas, Syracuse, Southern Mississippi, Kentucky, Florida State, Minnesota, West Virginia, FAU, LSU, Florida, FIU, Texas A&M, Maryland and Michigan State to name a few.

Sammy Harry, 5’7, 160, RB, 2022, Everglades @IhySammy
A promising athlete who shows good hands and the ability to make plays with the ball in his hands. He can make physical plays and stay on his feet and shows the ability to also operate out of the backfield as a receiving option, a person who can make a catch in stride and then create on his own. He is capable of finding his way through traffic and has also showed up defensively as a linebacker. A tough prospect who has been making plays for several years now and continues to increase productivity.

Tiwan McCloud, 5’9, 170, RB/LB, 2022, Hallandale @TiwanMccloud
An impressive all around athlete who shows great balance and power. He is a strong and muscular prospect who can read a scheme and then capitalize. He makes plays defensively and as a ball carrier and is good at anticipating his opponents moves and then getting out and making things happen on his own. He can create with the ball and absorb contact and stay in position and can come away with the ball defensively and shows great hands and all-around productivity and force. An elite and versatile athlete who currently holds offers from Maryland, UAB, Penn State and Marshall. 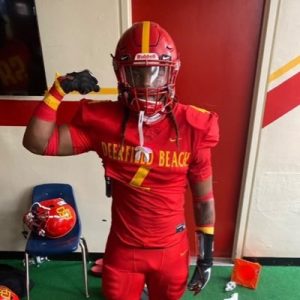 Jaziun Patterson, 6’0, 200, RB, 2022, Deerfield Beach @j4thegreat1
A big and physical prospect who has good speed and overall strength. He can run over opponents head on and is comfortable creating out of the backfield. He has good hands and can even operate as a receiving option at times and his size and muscle tone sets him apart at his position. An impressive talent who has the frame and the skill set and the all-around athleticism to make things happen with the ball in his hands. Patterson currently holds offers from Alabama, Miami, Florida, Auburn, Indiana, Mizzou, North Carolina, Maryland, Nebraska, Tennessee, Oregon and Michigan to name a few.

Corey Reddick, 5’9, 170, RB, 2022, St. Thomas Aquinas @reddick_corey
An athlete overall who has the ability to make plays both out of the backfield and on special teams. He has speed and a strong skill set on his side and he knows the game, his position and how to make the most out of every situation he finds himself in. He has terrific speed and endgame quickness and can zip through coverage and find his way to the outside where it’s rare to see a defender track him down. He is constantly adapting and looking for angles and can play both a physical and finesse type of game as a ball carrier.

Desmond Reid, 5’8, 176, WR/RB, 2022, Miramar @fastboidez
A strong offensive prospect who has the ability to make plays as both a receiver and a running back. He can scan the field well and understands spacing and how to connect with his quarterback and give him an easy target in the middle of the field. A slot receiver who has a strong mentality and a good frame and can also break away from tackles and play physical when pushing the ball through the line. An athletic player who has great hands and good at instincts after the catch. Reid currently holds offers from Tusculum University and FAU. 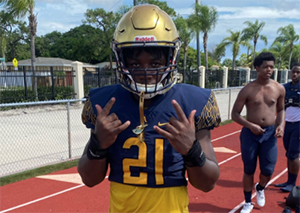 Jordan Smith, 6’0, 205, RB/LB, 2022, St. Thomas Aquinas @TGreatone1 NS
A multiple sport standout and also a player who can see time on both sides of the ball. Smith shows a nice combination of size and power and can be counted on for a variety of plays as both a LB and a ball carrier. Perhaps more known for his work defensively, Smith shows a lot of force and technique and can make strong tackles and shoot the gap. He is a smart player and one who isn’t maxed out yet physically. A good player overall and a stock riser moving forward.

Germanuel Tanelus, 5’10, 185, RB, 2022, Fort Lauderdale @GermanuelTanel2 1
A strong playmaker who shows a nice feel for his position. He can operate as a receiving option out of the backfield at times and is a physical player who has good speed and power. He’s coming off an injury and will be taking things slow, but he has a good upside and is likely to continue to pick up exactly where he left off. A strong athlete and a physical player who also brings a high IQ to the position. A player to keep your eyes on this next seasonHe is also a standout in the classroom and reports a 4.0 GPA.

Eric Trowbridge, 5’11, 170, RB/WR, 2022, Calvary Christian @EricTrowbridg29
A multiple position athlete who can create with the ball in his hands. He is an extremely quick athlete who reports a 4.53 laser 40 yd and has a 3.30 shuttle time as well. He has great hands and instincts with the ball and shows the ability to get out and make plays as a receiver and as a running back. the kind of player who is constantly improving and showing a lot of bounce and athleticism. He can weave his way through traffic and has great instincts as a ball carrier who can make catches and then turn and create but is also capable of making terrific place through the air given his length and catching ability away from his body.

LJ Watkins, 5’9, 165, RB, 2022, Coconut Creek @dhatboiilj
An underrated prospect who has great vision, good bounce and the rhythm to make a splash as a ball carrier. Watkins has a strong skill set and is extremely creative with the ball in his hands. He can change directions and stop on a dime and shows the athleticism needed to create on the fly. He is good at using his blockers but is also capable of making plays on his own and staying loose and looking to find openings. He runs well and shows mobility in spades and has the game that will likely translate well at the next level. A sharp prospect flying under the radar.

Jonathan
Williams
OL | 6'0" | 295
Winnetonka | 2023, 5’3, 105, RB, 2022, South Plantation @Johno_williams_ NS
Williams is a quick player with good hands who can operate as a receiving option and a running back. He has good speed and the ability to change directions and shift his feet well and can work his way down the field. He likes to find the outside edge that way he can use his speed in his blockers but he is also capable of working down the middle as a ball carrier. A hard-working prospect who plays above his listed height.

Makail Wilson, 6’0,190, RB, 2022, Hallandale
Wilson shows mobility and speed and can find his way through a crowd and get up the left side of the field well. He can handle contact and his physical and shows a hard-working mentality anda frame that can absorb contact well and stay on his feet. He’s a tough player who’s going to capitalize when he gets an opportunity. He’s strong and tough for the position and has good size and hands as well. Wilson can see time as a LB as well and has good size and a strong skill set.