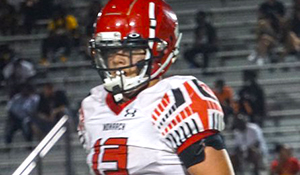 Defensive impact makers to know in Broward – We look at some of the very impressive defensive standouts and play makers to know among defensive lineman in the area, Big men on a mission and the warriors in the trenches that can take over the game and be a menace to offenses in the area.  Players like underrated power player Jonathan Puddie from Coral Gables.

@ArmandoBlount
Just a freshman this past season, there is reason to be excited about what Dillard’s DE and 6-2, 232 great framed Armondo Blount can do up front in  the coming seasons.  Blount is a player that  has a impressive built and we look for him to use his size and leverage at 6-2 to be one of the tougher players in area to get a good block against.  Is a major pass rushing terror for the Dillard defensive unit. With 10 offers already Blount of blowing up in a huge way with West VA as the most recent offer on his long list. The First Team All-County big man will be a guy to focus in on and will be landing a major long list of offers in the offseason for sure. 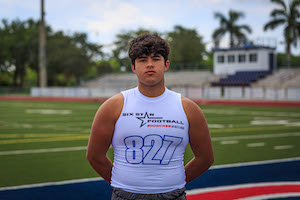 @gustavobravo66
Bravo is a big man that we like a lot in the 2023 class, this 6-1, 240 DL from Cypress Bay is a player that can play both defensive tackle and Guard on the offensive side of the football.  Bravo will look to be a key run stopper and be that big man that has his hat in on every play on a big senior season ahead in 2022. Bravo also is a fine student who reports a 4.1 grade point average in the classroom.  Bravo is a big man that can give the Cypress Bay defense a key pressure player up front, add in some impressive sacks and tackles against the run that can really play huge parts in the big games. Bravo led defensive line in tackles for losses and had two forced fumbles and one fumble recovery. Bravo went on an unofficial visit to Dartmouth and currently is talking to a couple schools right now.

@offxcialelvis_
Build is impressive for the Deerfield Beach junior DL, Carrion is a powerful 6-2 inches tall and 245 pounds and is a player that also reports a 3.8 grade point average in the classroom, a good looking big man that could become a hot senior prospect with  his size and potential. Carrion is a pure power guy, has that tough style of play and a bigger upper body that just won’t be pushed around, Carrion is a player that can lock up with the OL and win that battle with strength and physical play that can be very impressive.

@GordonTyrese
A longer and impressive frame at 6-4, 190, Gordon can rely both on some impressive length on his frame and speed on the outside edge to be a major pass rushing threat on the edge and a nice contain player that can use his long strides to track guys down well in space and make some impressive plays.  One of the more underrated players coming up in the Broward Area that could end up with a huge senior season in 2022.

@JasonHammondJR
Could Hammond be the top DL prospect in the area, for sure, this guy has the power and size that has earned him several major D1 offers and at 6-3, 280 he can claim his space in the trenches and is hard to find a way to block and keep ou of the backfield, Hammond has already racked up a long list of impressive big time offers that include the likes of Western Kentucky, UAB, FIU, Ole Miss, Syracuse, Pitt, Maryland, and Wake Forest. WIth an 80 inch wingspan college programs like his impressive overall physical stature and projection for being a elite D1 super  star in the coming seasons.

@Jkarmin2023
Karmin is one of the top area players on our DL list for the 2023 class, a hot junior play maker at 6-2, 240 pounds, Karmin is a player that also reports a 4.2 GPA in the classroom, one of those guys that really gets the job done on and off the football field, a prime time student-athlete prospect for the next level. Karmin at DE has some good size on his frame and is a player that was a major tackler in 2021 with 37 stops, 19 of those solo, 18 assisted and had four tackles for losses as  a guy that got great penetration on several plays against the run this year. 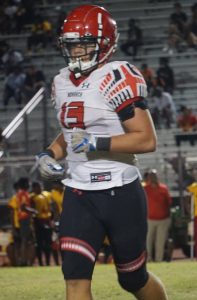 @GriffinJohnsto9
A very impressive looking 6-3, 230 DE/DT prospect in the 2023 class out of Monarch High School, Johnston is a player that has just gotten better and better by the game and a guy that we think is one of the better rising stars in the Broward Area, has good length on the line also at 6-3 inches tall.  Johnston posted 4.5 sacks on the year and was a major pass rushing threat that was a very tough man to block while also chipping in  2 strip sacks.  Had 10 tackles with four tackles for losses also in 2021.

@jaydenMassey954
Massey is a player that can lineup at either DL or LB and is a speed man on the defensive front that has been a very impressive play maker for Plantation.  Jayden is one of those athletes that helped Plantation to another impressive year going 9-2 and lost in the 3rd round with Massey finishing off a big junior year with  40 tackles, 1 touchdown, 3 fumble recoveries, 3 pass deflections,and  2 force fumbles.  Massey is a warrior on defense and is a player that could well have 70 plus tackles as a senior with his talent and experience entering the 2022 season.

@JonathanPuddie
We look at this impressive player out of Coral Glades at 5-9, 210 and you can tell that despite not being the biggest man on the field Puddie is a power player that can take over a game and beat the blockers to get in on plays and be a major force both against the running game and as a key pressure DL that can get up in the QB face and apply some needed pressure for the DL at Coral Glades. A name to know coming up in the junior ‘23 class.