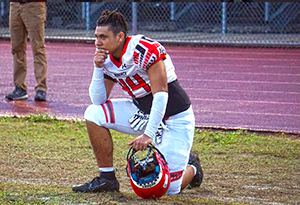 @recemono
Brooks who  reports a 3.7 grade point average, is one of the junior linebacker up and coming names to know in the Broward Area, really been a big year of impact for this impressive middle man.  Brooks, at 5’10, 175 is primarily an outside speed shut the offense down on the edge play maker at OLB and this Flanagan high school junior gem really added a great outside speed pressure attacker with a monster year of 10.5 sacks.  Brooks added one fumble recovery , 13 tackles for losses, added 41 Tackles and had one forced fumble in his eight games of action in 2021.

@Behumble24
Ellis is another fine junior that we think could be a big impact player in the secondary his upcoming senior season in 2022, Marcus is a play maker that can really cover  a lot of ground in a hurry, you have to be a major speed guy to be a closer like Ellis, is, no doubt a player that is both a hard hitter and an aggressive play maker, good speed to the ball, reads and reacts well and is a very hot looking athlete that has that loaded for potential skillset.

@jadenjacobs11
Jacobs is a player that can really be a riser, one of the linebackers that bulked up in a huge way over the offseason leading into his junior year, Jacobs will look to go out in style with a huge senior year in 2022 and grab some well deserved impressive offers.  Jacobs is a player that for Monarch can become a good one and a big team leader to take some major notice of in 2022. Jacobs is a play maker that we could see racking up 35-40 plus tackles in the coming year for the Monarch defense.

@GriffinJohnsto9
Taking a look at a major name to know coming up in the 2023 class, Johnston can be a major defensive first line of defense End and DT up front for the Monarch program.  Johnston is a player that reports a 4.7 grade point average in the classroom also.  Griffin is a big man that made the most of each of his eight games this year with 4.5 sacks that included a pair of strip sacks.  Jonnston also  added an impressive four tackles for losses.

@lil_ben2005
Good looking athlete, one of those guys that could really emerge as a hot sophomore play maker in the coming years, Joseph does have some nice height in the Flanagan secondary unit at 6-1 inches tall. Ben is a play maker that is very good at chasing ball carriers down and making some huge stops on the outside edge, corner with great speed, plays smart and can be a major downhill tackler, excellent one on one tackler and break you down athlete that has been impressive.  Joseph also reports a 3.8 grade point average in the classroom.

@gary_nanton
Nanton is a good looking athlete that can make some big plays in the junior class at Broward County,  Good looking lean and fast play maker to watch out for, very athletic, hot looking junior player that can really close in a plays and is a fine tackler.  Nanton is a very athletic player that can make some impressive impact plays.  One a team with a lot of senior play makers, South Broward will be looking hard to play makers like Nanton to step up and be a major impact player in 2022.

@GavonniRivera
Impressive looking junior play maker with some added speed in the Westminster defensive unit, this safety in the ‘23 is a player that was a menace in 2021, Rivera posted a good looking junior campaign with 52 tackles, 32 of those were solo stops, 3.5 tackles for losses, and had five pass break ups, one interception, and added one forced fumble. One of those rare get to every play kind of major defensive backs, Rivera is a hard nosed  play maker that can be all over the field and read the QB very well also.

@BraydenSlade_17
Slade is a very impressive speed and play maker in the secondary unit at Monarch and being 6-1 inches tall also helps a lot as Slade is a taller and harder to complete a play against secondary threat for the Monarch defense.  Brayden is a play maker that has been a major athlete of impact, also  a great baseball player, Slade reports a 5.2 weighted grade point average. Slade has the quick play reading skills and closing speed that make you think he must be a linebacker, but he uses that speed to come up from the secondary unit and be an extra big time stopper against the run who can finish tackles strong and plays very aggressive.

@Rashawn2024
Impressive built Defensive end at 6-2, 240, no doubt Watson is a very good athlete, also is very fine basketball player for Westminster, Watson is a player that uses his length plus solid muscle and power to be a force that is very hard to block off the edge, just a ‘24, his two years left should be big ones to watch him mold into a key future enforcer of the trenches and a name to know for the next level as well.  Both some toughness and aggressive style along with being a edge rusher that can take away his side of the ball and grab some big sacks and stops against the run, impressive movement and size, looking like a hot need to know prospect.

@JahseanW
A very impressive pure speed edge guy, Winchester is a flyer off that outside edge from either SS or corner, can be a great extra pass rusher that closes so fast the QB does not have ample time to react to his blitzing.  Winchester is fast and can make an impact anytime he is near the ball, can make a big play in either coverage or against the run and is that major speed guu that can chase guys down in the open field and make those game changing tackles.