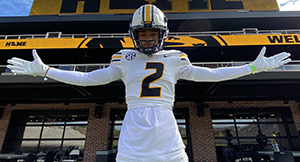 A standout sophomore, Dayton Doll has served as a utility man for the Platte County football team in 2022. Doll has the ability to line up in the backfield, but can also get moved out wide and beat you with his strong hands. Doll’s route running ability is crips for a 2025 player and he has proved that he isn’t afraid to catch anything over the middle. He is a strong runner with great ball security and will be a threat for the next few years in the Suburban-White. Doll is also a standout baseball player and reports a 4.54 shuttle with a 350 lb squat and 450 lb deadlift. 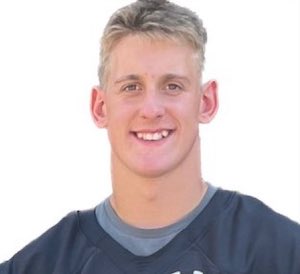 A strong edge rusher this season for the Panthers, Park Hill South 2025 Brock Harmon has the kind of size and athleticism that college programs look for in a young prospect. At 6’3, 225-pounds, Harmon has shown the ability to stand up against the run, gets a good push off the edge as a pass rusher and has the quickness to chase down opposing quarterbacks. Through nine games, he recorded 33 tackles, including four for loss and three sacks. Also a baseball standout, Harmon is a strong student who reports a 3.8 GPA. 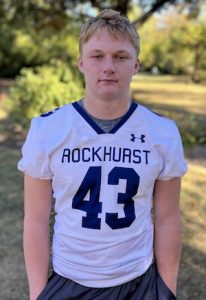 After putting together a breakout sophomore season, Rockhurst 2025 Jeb Koetting is poised to show his skills this December at the Six Star Football Midwest Showcase. At 6’0, 185-pounds, Koetting has a good combination of size, athleticism and football IQ that helps him quickly read plays as they develop and attack the ball. He is a solid tackler in space and has the speed and quickness to get to the edge or drop back into pass coverage.  He finished the season as one of the Hawklets leading tacklers and enters the upcoming offseason as one of Kansas City’s top rising prospects in the 2025 class. Also a standout student, Koetting reports a 4.08 GPA. 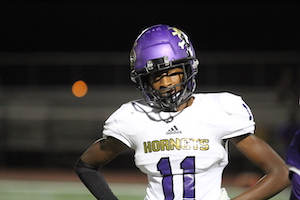 North Kansas City Gionni McBride emerged this season as one of the state’s top young cover corner prospects and will be a player to watch this upcoming offseason on the recruiting scene. At 6’2, McBride has a long lean build, runs exceptionally well and has the cover corner skills to turn and run exceptionally well and shows good closing speed. McBride is a terrific tackler in space for a young prospect as well, showing the ability to fight off blocks on the edge and get to the ball.

McGhee is a sensational tight end who will only climb up the rankings as he improves over the next few seasons and should be a top-ranked tight end when it’s all said and done. The 6-foot-5 sophomore uses his body for tough catches in the middle of the field and has the ability to take any ball to the house. McGhee has already jumped onto some college radars that like his size and ability to be an edge weapon for the offense and has helped the Broncos to a 9-1 record. He took a visit to Westminster on Oct.1 and visited Graceland, Bennedictine, and Elmhurst earlier this year. 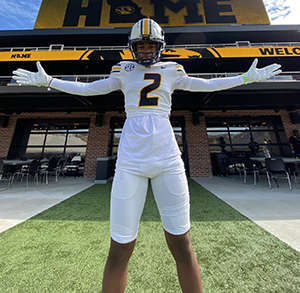 Mozee has been a key component to the Broncos’ success this season and has been the class of Kansas City’s 2025 recruiting class since his days in junior high. He has the ability to jump up and get the ball on any throw and shows off his strong hands and speed in every contest. Mozee is truly an elite player who can make any play his coaches ask of him and performs well when the lights come on. His recruitment really started to blow up last season and has only continued, currently holding offers from Georgia, Oklahoma, Notre Dame, Ball State, Michigan, Kansas State, Kansas, Arkansas, Nebraska, Oregon, Texas A&M, Tulane, Arkansas State, Wisconsin, Iowa State, Minnesota and Illinois. Mozee’s last visit came in July to Eugene, Ore. As a freshman, he produced 28 catches, 407 yards, and five touchdowns. He is 6-Star Football’s No. 1 wide receiver for the Class of 2025.

Ross is the true definition of a playmaker. Everytime Ross has the ball in his hands, everyone expects a big play. Ross is versatile, playing a little bit in the backfield, but mainly spending his time as a receiver and defensive back. He is a high-IQ player who can consistently make plays for his team. A player that will be interesting to watch in the 2025 class.

Rotterman is a force to be reckoned with every time he steps on the gridiron. Rotterman’s success on the football field translates straight to the wrestling mat where he was a Class 1 state medalist as a freshman, finishing in 4th place at 170-pounds. He is expected to be a top returning sophomore. Rotterman is a hard worker and is an aggressive player. From catching passes to making key blocks, Rotterman is a guy you would want in your foxhole any day of the week.

The first thing you notice when you turn on Toia’s tape is the speed he plays with on every single snap. Whether it’s from the safety position or as a hybrid linebacker, Toia is flying all over the field and has racked up 26 tackles and 43 total tackles in just seven games played. Toia serves as a key member of the Blue Springs’ track and field team, placing 5th in the 4×200 relay. He sports a 3.7 GPA with a 240 lb bench and 345 lb squat.