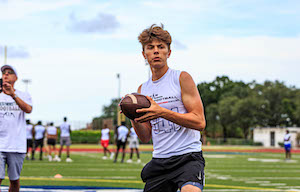 With the upcoming season now underway, Six Star Football takes a look at several QB prospects who stood out in the early going.

@JosephAllenQBSG
Eighth-grader playing up on varsity for The Benjamin School nearly led the Buccaneers to a win over John Carroll in his first varsity action. Allen is well poised early on and looks to be a young name to know among hot arms in the Florida ‘27 QB class at The Benjamin School. 6-0, 180, Allen is a player that really does a nice job of getting the ball out quickly and is always looking to find his man down the field getting open, a good power arm prospect that is looking like a great leader at a very young age. 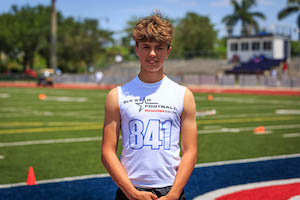 @QCamden2025
A standout at the Six Star Football Florida Showcase, 2025 QB Camden Hartzell opened the season with a big performance against North Broward Prep, completing 14-of-17 passes for 246 yards and three TDs in a win. As a freshman, Hartzell threw for 1,220 yards and 14 TDs, and already as a sophomore this season is looking like he will have a good chance to match if not surpass his impressive 2021 numbers. Hartzell, 6-0, 165, is a QB that has been very accurate this season in the early going and when you can pick apart defenses like he can, big things are going to happen for the Somerset Pembroke Pines offensive unit.

@LandenHolleyQB
He didn’t put up big numbers, attempting just seven passes, but 2027 QB Landen Holley got his first varsity action — as an eighth-grader — on Friday for Northside Christian as the Mustangs won its season-opener.  6-1, 150, a high potential to be a very good young QB prospect and name to know at Northside Christian, Holley is a young arm and needs to be on the high radar watch list for talent. Holley 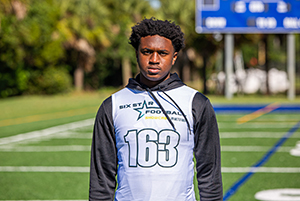 @jordanmagwood9
A standout at the Six Star Football Florida Showcase, Magwood opened the season with a strong performance against The Master’s Academy, throwing for 110 yards and two TDs. A strong student who reports a 4.0 GPA, Magwood has already drawn Division I offers from Rhode Island and Georgia Southern.  Magwood is a very impressive looking young arm to know and will look to be a big play maker for Sefner Christian this year, 6-0, 180, Magwood reports a 4.7 time in the 40 yard dash and reports a 31 inch vertical also as a nice looking athlete at the QB spot.

@Jayce_Nixon_
Talented left handed QB prospect was a standout at the Six Star Football Florida Showcase in the spring and finished the opening night 24 of 34 passing for 355 yards and four TDs in a big win over Steinbrenner.  No doubt off the a very impressive looking start to his sophomore campaign, Nixon is a guy that has a lot of potential is is looking like a guy that has that potential to have a monster season for Gaither High. Jayce is going to be a fun play maker to watch at the QB spot this year and is a lefty that has a cannon for an arm, loves to air it out and is a deep ball threat anytime he has the football in his hands. 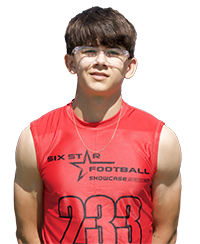 @MichaelRyan1_
Durant 2025 Michael Ryan completed 8 of 14 passes for a TD as Durant defeated Chamberlain. Known for his abilities as a kicker and punter, Durant 2025 Michael Ryan opened the season with a strong performance at QB as the Cougars defeated Chamberlain. Ryan completed 8 of 14 passes for a TD and showed a strong arm and good poise for a youngster.  With more and more experience this year, Ryan could be one of those guys that jumps onto some more radars in a big way and for sure has shown early on that he can be an impact maker to take some notice of.  Brings a big arm and a big leg to the lineup and is a valuable asset to have on the offense.

@austnsimmons
6-3, 190 lengthy and impressive play caller Austin Simmons of Pahokee is looking like he will be one of the top latest and greatest players to know to dawn the Demons gear, no doubt this guy is a QB that is looking like one of the top sophomores out there and his arm has been on fire early and often in 2022. Simmons has posted a 309 yard passing game to open the year and went 18 for 30 for a 60% completion mark.  No doubt a hot arm and a play maker to watch for out of Pahokee. 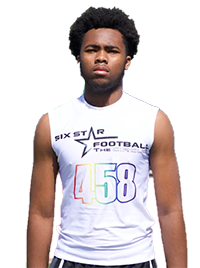 @Jeremy_T10
Talented QB prospect opened the season strong with a big performance against Pinellas Park. He was a standout performance in April at the Six Star Football RANKINGS ID Showcase in Orlando.   A very athletic play maker that you have to account for at all times, very busy feet in the pocket, a player that is never still in the backfield, and a dual threat capable QB that loves to throw the ball as well, good arm and a top notch looking athletic play maker with speed and an arm to always make the defense stay honest when he is on the field. Looking like one of those high risers at the QB spot for impressive talent in the 2024 class. 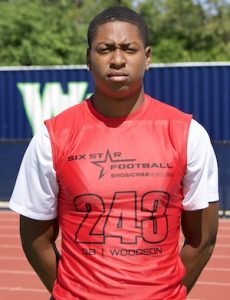 Woodson has all  the makings of being a top notch senior QB this year and impressed us last year at the Orlando Showcase. A Navy commit, the 6-3, 205-pound QB has terrific size and is tough on the field. Woodson will look to follow up an impressive junior season in which he racked up 1240 rushing yards, 12 TDs, and had 424 passing yards and 3 passing TDs. No doubt a major dual threat QB that can run the ball and pass the ball, size and speed, a very good runner with the ball in his hands to take major notice of.