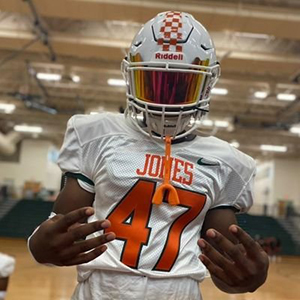 STOCK RISERS | Orlando area LB prospects raising profile (2023) – We take a look at some of the top risers and best linebacker prospects to know in the Orlando area in the 2023 class, top tacklers, play readers and play makers to know that are big time risers and tackers in the heart of their defenses.

@Braydan_13
Adams was fourth on the team with 66 tackles this year, has the speed to play both the outside linebacker and secondary unit spots, a valuable weapon for the  Longhorns defense as a big time play maker that can  cover the  entire field very well and make some impressive plays with his fast feet. Had nine tackles for losses on the year and 7.3 tackles per game average in his nine games of action for 2021.   No doubt one of the top returning tacklers in the ‘23 class, second among juniors in tackles this year, Adams will look to be  guy that chases 100 tackles as a senior for the Longhorns. 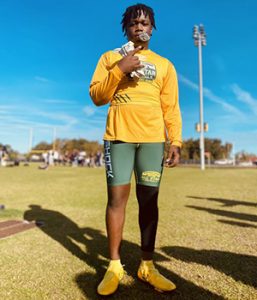 @ducegolive
An impressive  outside backer for the Central Florida Christian  Academy Eagles, and two way player that can also help the Eagles out of the backfield as a RB. Charles, a 5-11, 205 junior, is a player that is one of the most physical and hardest hitting outside linebackers that you will see. A guy at 205 that can really bring some impressive hitting power from OLB position and be one of the top enforcers of the edge to know among Orlando’s finest  OLBs coming up. Third  on the team with 31 tackles and had  3.4 tackles for losses for the ‘21 season.

@MosesEzechi
A very impressive looking middle linebacker from  Jones High, Ezechi is a 6–0, 215 guy that has some major pop and power to his game and is a very promising next level athlete that can really clean up plays with the best of the best from his middle  backer spot for Jones.  Moses has big power and is very  fast, one of those guys that moves great and has some impressive size also, can lineup at DE of MLB and be a major force that is very hard ot block and contain.  A great looking pass rusher and play maker against the run to keep an eye on in the 2023 class. Was fourth on the team in tackles and will be the leading returner for tackles next year, had 54 on the season in his 12 games and racked up eight tackles for losses as well.

@Andrew05478857
Harris is a player that at 6-1, 195 is a very athletic and speedy at his middle backer spot, Harris led he Patriots in tackles this season with an  impressive 103  tackles, and had 14 tackles for losses, no doubt a play maker that lived in the  backfield and was a pure menace to handle for offenses. Harris played in 11 games ahd had a 9.4 tackles per game average with a big time looking 91 solo tackles on the year and had 12 assisted  tackles for the Patriots defensive unit.  Michigan State and North Carolina area recent offers including a Navy offer from track and field as well.

@antonjholland
Holland is a play maker on the outside  edge that is among the tops in the Orlando area  for pure speed and athletic skills nad a player we think is in for a big 2022 and senior season ahead.   Holland is an elite speed rusher that is very fast and can bring the heat, can play both OLB and DE spots, a long strider with a lengthy 6-2 inch frame, his speed is very  explosive and he is a very hard player to get a  body on to block before he is making a QB run for his life. No doubt a player that has a great college frame and is one of the top speed threats in the Orlando area. Had 37 tackles in 10 games  this year and averaged 3.7 tackles per game for Evans.

@Adrian_Jackson4
Jackson is a player that is very fast and brings the heat for the Jones outside contain and pressure game against the run, good speed, 5-10, 175, a player known for being that extra track you down and make a huge  stop kind of athlete out there every team loves to have.  Jackson is a play maker that had 16 tackles in eight games, may be more of a defensive back prospect know from his original  spot at outside linebacker, his cover skills  are very good and his home may be as a hot ‘23 DB prospect for the  radar in the future to watch out for.

@Zeldrick4
A very impressive looking speed guy for the Apopka defensive unit, Roberts is an impressive play reader and athlete to know that can read and react and bring that outside speed to the defensive unit. Roberts is one of the most physical backers in the area and started out as a linebacker most likely going to stay at the running back position for the Apopka program going forward in the future and  had 12 TDs this year and had a little over 500 yards this year on the ground. Good speed, Roberts reports a 40 time of 4.7.

@Keelansmith04
Smith is one of the most athletic play making linebackers out there, and  there are lots of OLBs with talent but not many that have his talent no doubt Smith is one of the best of the best in the Orlando area, a great surveyor of the field,  Smith also has a powerful  6-2, 215 frame to be one of the hardest hitting machines in the area and really be a guy that offensive ball carriers fear to face knowing he is going to be making a lot of plays with his power in the middle.  Had 26 tackles on the season and five  tackles for losses.

@AustinStief05
A hybrid linebacker and defensive end from Cypress Creek, at 6-3, 215 no doubt about it that Stief has  some of the top college ready size among Orlando linebackers and prospects to know and he  uses his extra length well to make some great edge plays from either being on the line or the outside edge of the Cypress Creek defense. Stief’s size may have made him more of a DE prospect for the future which could bode very well for his college recruitment, also plays TE on the offensive side of the football. Was third on the  team in  tackles with 58 tackles, had 5.8 tackles per game and had nine tackles for losses for the 2021 season.

@Sam_Zagame13
Zagame is one of the riser names to know among Outside Linebackers in the Orlando area, a play maker and speed guy at 6-2, 220 with some elite size at his spot for Foundation Academy.  Zagame is a player that can be a major menace and led the 7-4 Lions in tackles this year with 104 tackles in his 11 games of action.   Zagame is  a player that had a huge 20 tackles for losses and averaged 9.5 tackles per game on the season.