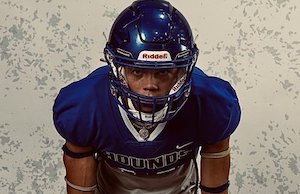 STOCK RISERS | Orlando area LBs making waves (2024-25) – We take a look at some of the most impressive up  and coming play makers among the Orlando area’s top backer prospects in the 2024 and 2025 classes.  These are guys making big strides in their games and hot prospects jumping onto the next level radars to take some major notice of.

@BlanfordBryson
Blanford is a player that can play both linebacker and free safety, some good speed and a guy that can be a key play maker in the coming two years for Oviedo.  Blanford, a sophomore this year, started the last 5 games at outside linebacker taking the spot. It’s a 3-4 hybrid OLB spot for Blanford and he  was an impressive blitzer a  lot and cover man, no doubt Bryson  was a good looking  cover man that had many deflections this year and 2 picks which tied for 29th on the Orlando Sentinel. He racked up 35 tackles, 2 ints and had two sacks. Blanford also had five  pass deflections on only 5 games starting.

@Cintron_Jason4
Cintron is a guy coming up from Lake Howell that makes out list from his outside linebacker spot and is a player that we think will continue to be a big impact maker on both sides of the football, a powerful running back and a good looking speed backer that is very smart and crafty on the outside, Cintron is a guy that is very good at reading the pass also and making a quick play on the ball while its in the air.  Talented and fast, Cintron has a big future at both spots in the lineup in the coming years for Lake Howell. 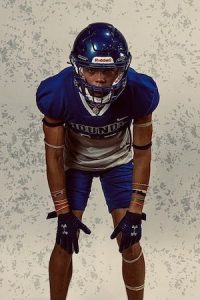 @DominicDaoust1
Dominic is a sophomore from Lyman, this 5-11, 155 speedy flyer is one of the guys coming up that could make some noise in the coming 2022 season  for the defensive unit at Lyman.  Daoust had 32 tackles as a sophomore and was a key starter this year, can play SS and linebacker, has good  speed, hard hitter, and is  excellent in the pass coverage game for the defense.  Daoust is a good looking play maker that can make it happen and a player that also reports a 4.65 time in the 40 yard dash, very impressive younger player coming up, hot ‘24 that returns with a lot of experience and talent. 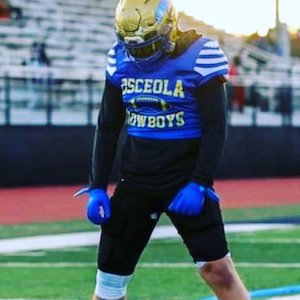 @glassmeyer_liam
Glassmeyer has some impressive size at 6-0, 220, this Winter Park solidly build enforcer is one of the ‘24s to know in the Orlando area.  One of the most impressive looking athletes coming up at backer, this ‘24 play maker had 35 tackles, good for fifth on the team, and had a big time eight tackles for losses, good for third most on the team, no doubt this guy is a big time looking young athlete, also was the top sophomore tackler on the team this year.

@Sebastian202521
You always have a few linebackers that are made for speed and making those fly all over the field kind of plays, that’s what we see more and more for this 5-8, 160 backer from Oviedo, just a freshman this year, Sebastian is a player that will get bigger and faster in the coming years and could well be a name to know for the Oviedo defensive unit. 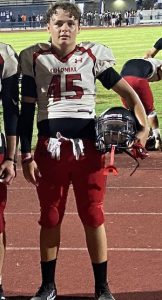 @IsaiahMorales45
Just a freshman, so Morales has a long time to get more and more experience in the heart of the Colonial defense, 5-7, 170 its a speed game for Morales on the outside edge and with three more years left he will look to be a guy on the edge that will use his wheels and speed to be a great contain and force the plays to the inside defenders on the  edge. Morales is a very good play reader against the pass also, plays smart and has some good reactions to the ball in the air, nice cover speed back and spy on the outside defense for Colonial.

@g6nix
Nix is a player that has some good speed at Lake Highland, one of those players that has been offered by Miami and is one of the most impressive looking speed backers we have seen.  Its not very often that you see a guy with his all out elite speed from the backer spot, this guy is so fast he usually is untouched on his way to making a huge stop in the backfield, no doubt we can see this freshman stars offer list growing in a huge way this offsesaon, Nix should be one of the elite and hottest Orlando recruits on the college football scene, you just don’t find guys with his speed very often, no doubt Miami is a team that has seen this early and has been big time impressed.

@Woodyoreus3
Oreus is a player at middle backer from Ocoee that can use some speed to be a impact maker, no doubt Oreus is a younger player but has the speed and the body to be a future name to know in their lineup and is a player that we could see getting a lot more experience in the upcoming 2022 season as well. A name to know for being an athlete on the radar, keep an eye on this up and coming ‘25 for the Knights defensive unit.

@daltenphelan24
Phelan is a well sized long and lean 6-2, 200 for Harmony, and is a player that can use his fast feet and is one of the most aggressive players we have seen from the edge, also can play DE along with backer, a big time edge guy with speed and toughness that is hard to match.  We like Phelan’s best skills of being an impressive play reader and reacting to plays very quickly. Phelan reports a  40 time of 4.9.  Phelan was second on the team in tackles with 71 tackles in nine games. Dalten had 15 tackles for losses also, good for second most on the team this year.

@YktvBrad
Vera is one of the most talented young linebackers coming up in the Orlando area and a major enforcer at 6-0, 220 pounds, a very hard hitter and one of the most intense play makers you will find in  the area as well.  Brad is one of the elite play makers in the Orlando area and had a huge season in 2021 and was elected a 1st Team Defensive Lineman by the Osceola News Gazette’s, was an All County pick also that had  77 Tackles, 8 Tackles for Loss, 2 Forced Fumbles & 2 QB Hurries, no doubt a big time .