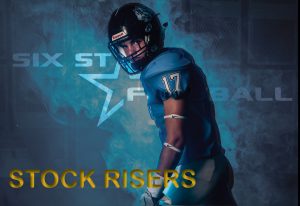 STOCK RISERS | Orlando Area OL raising profile (2023) – We take a look at some of the big men and most talented blockers to know on offensive lines in the Orlando area and metro areas.  Big men all looking for huge final seasons in the trenches in the upcoming 2022 season ahead.

@JrShondelle
Branch is a well sized and good framed put together 6-3, 245 pounds from University High School, Shondelle is one of the most all our aggressive tackles out there on the edge, really loves to hammer down n guys and take them out of the play and onto the ground and does  a great job of doing just that.  Love his power and his toughness, one of the  best look edge blockers to know entering a huge senior season.  We like his talent a lot to earn several next level college offers with his hands and toughness on the edge.

@KhiddVince
A very impressive powerful player, Burse bench presses 250 pounds and is one of the tackles up front for Edgewater that has been a great pave the path kind of blocker at tackle.  Burse is a good one that has been part of one of the most high powered offenses  out there and a team  that has found a lot of success in both the running game and passing game, no doubt its big men like VIncent in the trenches that are the unsung heroes of the offense.  Big time looking talent to know.

@DJaun_Gilbert52
Gilbert is one of the  meanest and most fierce competitors you will find in the trenches and a player that can really take the defender out of the play completely and dominate his spot on the field as a key big man prospect to know.  Gilbert at 6-2, 275 is a big framed power player that has some nice versatility also and can play both guard  and center.  A player that has a great first step off the snap and one of those big men that can rally get into the defender in a hurry and use his power and good footwork to be a open the holes big man of talent.

@RN_Chriss
The big man from Tohopekaliga is 6-3, 260 and a man to keep on the radar for the next level entering what looks to be a big senior season ahead for Christian.  Gordon was so good that he did not allow a sack all  season long and is one of those big men that you watch and can tell he is very powerful and just blows defenders up and knocks them five yards back off the football.  Huge power and big time talent, Gordon is one of the top tier looking ‘23 blockers in the Orlando area to know.

@Joshuamald1
Maldonado is a well sized 6-3, 260 pound big man from Lake Howell that can play both Guard and Tackle on the O-Line, a name to know, 6-3 length is not bad at all and could attract some college attention with his frame of length.  Joshua is also a good wrestler and brings that mentality to the football  field as well, no doubt a fierce competitor that can make some huge blocks and plays happen and one of the names to know among the big men in the 2023 class.

@Josiahmongiell1
Mongiello is one of the most impressive looking big men  out there in Florida football for size and power on an offensive line and this 6-4, 305 big man from University High School is a power blocker that can be a major footwork guy, you see him at 305 pounds being a way down the field blocker, really works very hard at his craft and is a big man that motors down the field as a very valuable blocker that can make multiple blocks on every play, no doubt a great looking power and footwork guy, Lane has offered, many more should be on board also with this big men’s work ethic and talent level plus size and power.

@brody_riffe
Riffe is a huge 6-8, 290 pounds and  for sure  warrants those D1 looks with his size and frame on the West Orange offensive line.  Brody is a good aggressive hands lineman, can really dominate with his size and power, good looking player that moves the  pile and uses his size very well to blow guys up and knock them off the line and make some impressive running lanes for his running backs to get through and make big play happen for.  A major name to know in the  Orlando area for big men in the 2023 class.

@GraysenRiffe
Riffe is as big as they come on prospects to know being a 6-8, 285 pound tackle from West Orange, no doubt he is a player that really should be attracting some major college attention and we expect a very busy season of recruiting in 2022 with his power and great D1 sized frame.  This very talented edge blocker uses his length very well to seal off the edges and keep the DEs at bay, no doubt long arms, leverage and power make it tough for any DE to get a good pass rush against the 6-8, 285 Riffe. Major size and a hot one, keep an eye on this  big man  from West Orange.

@5ifty0ne
Scott is a big man to know from the program at Ocoee, 6-1, 250 pounds, Deandre is an impressive looking lead blocker and tough guy of the trenches to take some major notice of.  Scott is one of those tackles that can really seal the edge with the best of them, gets out side quickly and uses his hands well, good footwork and with his active feet gets into great positions to make those key springing blocks down the field and open the field up to his runners to make big time plays.

@tshanahan66
The big man from Timber Creek at 6-5, 300 could be the best looking offensive line prospect in Florida, no doubt he is a man of major talent in the trenches that has gained some big time next level attention and offers from some of the best programs in the nation. Shanahan has 50 offers to put that into perspective. Jackson State was the most recent offers, before that some of his most recents have come from Oklahoma State, Miami, Texas Tech, North Texas, and USC.  No doubt this guy has it all and is one of the most devastating blockers you will see on any football field in Florida.