STOCK RISERS: Orlando area running back names to know – We look at some of the best running back prospects in the Orlando area coming up, top speed backs and players that are making a big name for themselves out of the backfield to take some major notice of.  Players  like Jules from Windemere Prep... Read more » 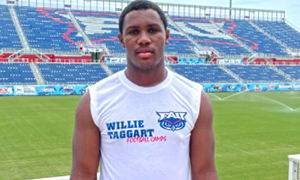 STOCK RISERS: Orlando area running back names to know – We look at some of the best running back prospects in the Orlando area coming up, top speed backs and players that are making a big name for themselves out of the backfield to take some major notice of.  Players  like Jules from Windemere Prep and 205 pound Orlando Christian Prep running back Zhyan Karioki are guys whose names should be prominent in 2022.

Cameron
Bennett
RB | 5'9" | 187
Lyman | 2023, 5’9, 175, RB, 2023, Lyman @Cam30Ben
A very powerful running back prospect to know from Lyman High School, Bennett is a player that can use some very quick feet and has been a proven big time weapon in short yardage situations and is becoming known as the running back that can punch it in for the score from 8-10 yards out, no doubt a good looking player and an offensive weapon that is on the verge of a very big senior season at Lyman.

Lamarius Fair, 5’10, 180, RB, 2024, Apopka @TheLamarius
A very athletic looking running back, one of the best for pure potential to be a big time college prospect, a very strong and athletic 180 pounds and one of the tops for being a athlete on the rise in Orlando. Fair is a player that is one of those outwork everyone on  the football field type of athletes and is a running back that could emerge as a big time prospect in the coming year, and with two years left Fair has the talent and build to be a D1 tier prospect on the making.  Big things ahead for another Apopka standout athlete to know.

Gregory Jules, 5-9, 175, RB, 2024, Windemore Prep @Greg_Jules_916
A top speed back, Jules reports a 40 yard dash time of 4.69 and is a runner that has a very athletic frame also for Windemere Prep.  Jules, 5-9, 175 pounder, is a back that can use both speed and is a player when you watch him you can tell is a very hard runner with the football and one of those determined runners to get every yard he can out of the backfield.  Good outside speed and a guy that can beat the defense to the edge.  Was injured for five games in 2021, looking for a healthy full season to show out in 2022.

Zhyan Karioki, 5’10, 205, RB, 2023, Orlando Christian Prep @karioki_zhyan
Karioki is a running back to keep an eye on from Orlando Christian Prep, impressive speed and a runner tha3t cabn use some good vision to hit the holes quickly and make some very impressive runs happen.  He is a runner that also packs a punch on contact at 205 pounds no doubt he can be a runner that can run defenders over when he needs to as well. Hot radar maker for talent with some size also, Zhyan should be a player to watch for at RB for 2022 in Orlando.

Laggarius Marshall, 5’8, 170, RB, 2023, Boone @LaggariusM
UMASS was the first D1 to offer Marshall in late January, no doubt we see him getting a lot more offers very soon with his impressive skill set and speed from the Boone program.  Marshall is one of the most impressive looking make a cut and change direction running backs out there, very hard to contain, hard to tackle in space, a prospect that can be a good receiver also, hands are there to make him both a catcher and rusher to take notice of.  Expecting a 1,000 yard senior season from this key Boone running back on the verge of racking up a long list of D1 offers ahead.

John Scarelli, 5’10, 175, RB, 2024, Hagerty @JohnScarelli
Could be the most underrated running back in Orlando, a very impressive tough runner that is going to get every yard possible when he is handed the football.  This Hagerty junior to be prospect was a runner that had around 400 yards on the ground and we expect will be a near 1,000 yard rusher in 2022 with his experience and talent to rip off some big runs  no doubt.  Averaged around 10 yards a carry also, one of the toughest runners to bring down in Florida football for 2021 as well.

Kaden Shields-Dutton, 5’11, 208, 2024, RB, Edgewater @K23sd
A very impressive athlete, has both power and speed, a runner that has a quick first two steps out of the backfield and cna get to the outside quickly, good beat the defense to the edge runner, runs hard with the football also, reports a 275 pound bench press, big time powerful upper body as a nice runner that is hard to contain and is fast also, 208 pounds coming at you with his speed and talent is a runner that is going to cause some major problems for defenses to handle in 2022.

Oniel Senatus, 5’11, 170, RB, 2023, Celebration @OnielSenatus
One of the most talented prospects we have seen at RB in the Orlando ‘23 class, Senatus is jumping onto some college D1 radars like South Florida (offered), he is a player that earned Third Team All-State honors for a very big junior season this year and will be looking for a monster final season as a senior rusher in 2022.  Senatus also was a First Team All-County pick, he finished the season with 27 touchdowns, 1,816 rushing yards, 300+ receiving yards, and had 55 tackles (34 solo) on defense.  Prime time looking athlete to take major notice of.

Taevion Swint, 5’10, 180, RB, 2025, Osceola @TaevionSwint
One of the elite running backs in the state of Florida, hard to believe that this big time athlete was just a freshman this past 2021 season for Osceola but he was.  Expect one huge sophomore season from Swint, a player that gained valuable experience and was one of the top athletes on the field at all times in a big 2021 season.  Swint earned his second D1 offer from Florida State in late February, no doubt just the start of his big time recruitment as a prime time running back prospect to know.

Melo Ware, 5’9, 170, RB, 2024, Lake Highland Prep @MeloWare11
Ware is one of those runners that has that athletic look, a big time player for Lake Highland Prep, Ware rushed for 1400 plus yards and 20 TDs on the season, no doubt a running back that was among the elite of the elite for yardage and TDs, this offensive weapon is a player that can really hit the holes and see the field well, good footwork, smart runner and one of the guys that is among the most dominant rushers in the state for the 2024 class, a big college future is ahead for Ware who is already being looked at by several big time college programs.