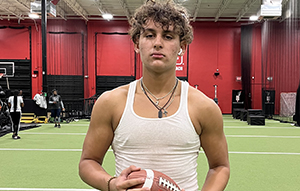 @GabrielBirnbaum
Talented sophomore long snapper and a defensive end, Binrnbaum is a player that should be a key one for the Boca Raton defense in the 2022 and  2023 seasons ahead. Has a great combination of athletic skills and power, Birnbaum reports a bench press of  270 pounds and  reports a 29.5 inch vertical.  Will  be one of the young players coming up that we can see getting more and more  experience on the edge of the defensive with his talents.

Blanc is a very impressive looking end for Somerset Canyons and a guy that is based on his pure  speed and being a very tough edge guy for the big  OL  to be able to block or get in front off. Blanc is  a player that will be looking to blow up some major plays against the run and be one of the future enforcers in the lineup. Finished third on the Cougars defense with 43 tackles  in five games and had 29 assisted  tackles and 14 solo stops for a big season at Somerset Canyons. Blanc will be competing at this year’s Six Star Football Florida Showcase on Jan. 29 at Somerset Canyons in Boynton Beach.

@JamesBrooks561
Brooks is a play maker and a SS that can come up and make  a big tackle against the run, a good and quick play reader, can be a hard hitter also and be one of the guys from his SS spot that  can be like having another linebacker in the lineup with his closing speed and ability to read and react quickly for the Chiefs defense. A name to know and a player that has some good footwork also in the defensive backfield.

@davonbryantd1
Bryant is 6-2, 205 and  can play  both middle and  outside linebacker for Palm Beach Lakes. Davon is a  very impressive built player and a key tackler also on the special team unit for the Rams.  Bryant is a powerful hitter and one of those guys in  the lineup that can always cause a big time hit and knock the ball loose.  Impressive looking athletes and a guy that will look to be one of the more physical players in for the Rams in the coming 2022 season.  Powerful and a  player that has a  good motor as well in  the  middle of the defensive unit.

@LandonCarr24
Carr is a very impressive looking athlete and a defensive back that plays smart and goes all out for  Jupiter High.  This 5-11, 175 play maker is a guy  that can also  play offense and will look to be one of the key two way impact makers on the  team, can play both linebacker and DB and RB, will look to use his speed and quickness to be one of the  key risers in the  lineup at Jupiter.   WIll be a player for the Warriors that will be one of the most athletic in the sophomore class and is one of the eye catchers we have seen that can really be a good college attention grabber.

@realandonC
Landon may not be the biggest player in the area but he is one of the  toughest and can really mix it up at 200 pounds for the Palm Beach Gardens program. Landon is a player that also plays Guard on offense and is one of the players  that could emerge as a key trench warrior.  Saw action in  eight games for the Gators in  2021 and will be one of the sophomores that will get more and more time in the coming years ahead.  A player that will be one of  the names to know and one to watch for in 2022.

@gocrazy_josh
Josh is a  good looking corner is a very talented defensive  backfield at Cardinal Newman, Philostin can use his elite speed to be a major enforcer and had 27 tackles in 12 games as one of the top play makers for the Crusaders defensive backfield. He is one of  the younger standouts on the team and really could be the top riser on the team to take notice of.  Track  start who competes in the 200  and 400  meter events. 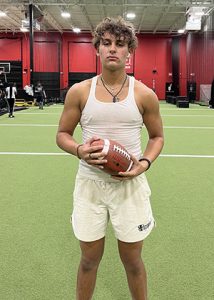 Serna is a talented 2024 play making outside speed linebacker for Spanish River,  Serna is a good play maker and one  of those players that can track you down  from behind with his speed and wheels and make some impressive tackles for losses.  Good looking athlete, one of the  players  on the team we think will be a name to know in the 2022 lineup and one of those guys that will be a shut the running game down from his edge spot with speed play makers.  One to know coming up in the 2024 class at OLB. Serna will be competing at this year’s Six Star Football Florida Showcase on Jan. 29 at Somerset Canyons in Boynton Beach.

@wakeemup8_
Thomas is a big 275 pounds and will look  to be one of the men in the trenches for Boynton Beach that can be a key  run stuffer in the next two years. Jamarous is a player that can get right into  the mix and me a power tackler, good frame  with some bulk  and toughness in the lineup, Thomas could be a major riser in the next two years and should be a key big man to know.  The Tigers will be  looking to have Thomas as an impressive first line of defense presence and a guy that should be able to make a  nice impact in the coming year.

@BraylonVincent
One of the standouts we like a like in the Palm Beach area  from the defensive backfield is Cardinal Newman’s 6-0, 160 Braylon Vincent. Vincent was the top sophomore tackler on the Crusaders defensive unit this year with 49 tackles in  13 games and had eight tackles for losses and was sixth overall in tackles for the 2021 campaign. One of the top downhill play making safeties you will find in the 2024 class, Vincent is a big time closer and a  impressive hard hitter that is both very fast and very smart from the DB for Cardinal Newman.