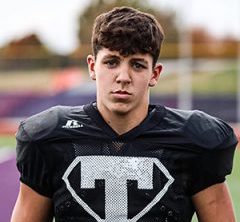 Six Star Football takes a look at several rising prospects in the 2022 class that are drawing new offers from NCAA Division I programs.

Keyshaun
Elliott
QB | 6'2 | 213
Richmond | 2022, 6’3, 215, QB/ATH, 2022, Richmond @8Keyshaun
Richmond 2022 Keyshaun Elliott is coming off a junior season in 2020 that saw him record 1,224 passing yards, 1,247 rushing yards and 41 total touchdowns. Blessed with terrific size at 6’3, 215-pounds, Elliott has next-level athleticism and a frame that projects well with age. A talented QB prospect who shows a strong arm and the ability to escape the pocket and make plays, Elliott has the kind of size and athleticism that could allow him to play any number of positions in the future. He recently picked up his first offer from Eastern Michigan and has drawn interest from several other programs as well.

Grant
Finley
DE | 6'3 | 210
Chaminade | 2022, 6’4, 225, DE, 2022, Chaminade. @GrantFinley8
Chaminade 2022 Grant Finley opened eyes with a huge junior season for the Red Devils, earning second-team all-state honors. A workout warrior in the weight room, Finley is known for his work ethic and strength. He plays the game with a huge motor and brings versatility to the field, capable of playing a pass rushing defensive end, outside linebacker or tight end. He picked up his first offer from Southern Illinois in early December and has drawn interest from several other programs as well.

Ashton
Flinn
OL | 6'4 | 300
Jackson | 2022, 6’4, 300, OL, 2022, Jackson @ashton_flinn
One of the state’s most talented offensive lineman prospects in the rising 2022 class, Jackson’s Ashton Flinn brings a versatile, well-rounded skill set to the field with the ability to play multiple positions along the line. He and 2021 Mizzou recruit Connor Tollison

Connor
Tollison
OL | 6'5 | 270
Jackson | 2021 formed a tough, physical 1-2 punch at tackle this past season, with xx manning left tackle and Flinn on the right side. But we also see Flinn as a prospect who could move around on the line and take advantage of his skill set. He moves his feet exceptionally well, is strong and physical and has a frame that projects well with age. He recently picked up his first offer from SEMO and later added an offer from Eastern Illinois. He has also drawn interest from Kansas State, South Dakota, Columbia, Miami (Ohio), Rice, Murray State and others. 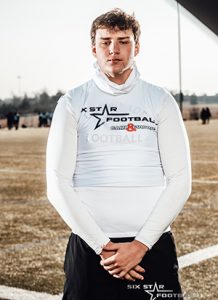 Jimmy
Lansing
OL | 6'7 | 280
Chaminade | 2022, 6’7, 280, OL, 2022, Chaminade @JimmyLansing76
A standout at the Six Star Football Showcase in St. Louis in December, Lansing has earned a reputation as a high upside tackle after his performance this past season for the Red Devils. Blessed with terrific length and agility, Lansing has shown off his athleticism on the hardwood for the Chaminade basketball team. He has picked up offers from Brown, Columbia, Dartmouth and Southern Illinois, and has drawn significant interest from several others as well. Also a standout student, Lansing reports a 4.0 GPA. 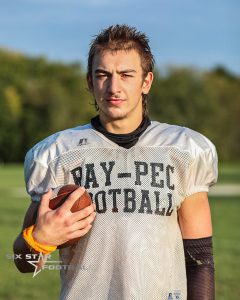 Tucker Miller, 6’5, 230, TE, 2022, Raymore-Peculiar. @tucker11miller
Raymore-Peculiar 2022 Tucker Miller enters the 2021 season as one of the state’s top pass catching threats at tight end. Blessed with good size at 6’5, 230-pounds, Miller can block at the line, make plays over the middle of the field, or split out wide and create a mismatch downfield. He has strong hands and is capable of making the spectacular catch look routine. Miller runs well, has a good feel for finding open seams in a defense and is tough to corral after the catch. He went for 41 catches for 457 yards and four TDs and earned all-state honors as he helped the Panthers win a Class 6 state championship last season. He recently picked up his first offer from Eastern Illinois.

Cody Simoncic, 6’3, 190, OLB/FS, 2022, Smithville @CodySimoncic
Smithville 2022 Cody Simoncic enters the upcoming season as one of the state’s most intriguing defensive prospects as he has shown the ability to play outside linebacker and free safety. Armed with terrific size at 6’3, 190-pounds, Simoncic has a long, rangy frame and the potential to add good muscle mass and weight with age. He covers a lot of ground quickly and has shown the athleticism necessary to play the ball in the air and break on the ball at safety, as well as the strength to get off blocks and make plays on the perimeter at outside linebacker. He recently picked up his first offer from South Dakota State and has also drawn interest from Tulsa among others. 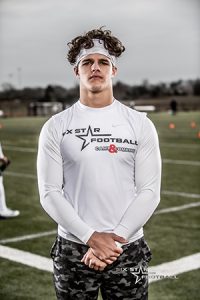 Cooper
Roy
LB | 6'1.5 | 210
Glendale | 2022, 6’3, 220, DEOLB, 2022, Glendale. @CooperRoy51
Roy is coming off a monster junior season that saw him set a new state record for sacks and pick up his first offer from hometown Missouri State and later the Kansas Jayhawks in the process. Blessed with explosiveness, a big motor and an athletic frame that at 6’3, 220-pounds projects well, Roy is a match-up nightmare for opposing offenses. He uses a combination of strong hands, physicality and a quick first step to attack opposing quarterbacks. He recently added offers from Toledo, Northern Illinois and Bowling Green to his offer sheet.

Chris
Skiljan
LB | 6'1 | 225
DeSmet | 2022, 6’1, 225, LB, 2022, DeSmet @Cskiljan4
DeSmet 2022 linebacker Chris Skijan opened eyes by putting together a big junior season for the Spartans as he earned all-district honors as he recorded 65 tackles, including five for loss in just six games. Skijan has the kind of size and physicality that college programs look for as he measures in at 6’1, 225-pounds.  Known for a big motor and ability to deliver big hits, Skijan brings a combination of quickness and physicality to the field. He can diagnose plays quickly as they develop, works hard to shed blocks and is a sure tackler in space. Also a standout student, Skijan reports a 3.64 GPA. He recently picked up his first Division I offer from Kent State.

Khalid Stewart, 5’11, 175, DB, 2022, DeSmet @itssskhalid
One of several likely future Division I recruits at DeSmet, 2022 DB Khalid Stewart recently picked up his first Division I offer from Kent State, a program that has hit Missouri hard in recent weeks. Stewart is one of several DeSmet players who are waiting in the wings and poised for a breakout senior season in 2021. At 5’11, 175-pounds, Stewart has terrific speed, quickness and athleticism and is a competitor at defensive back. 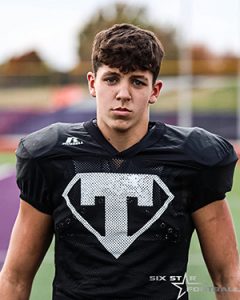 Carson Willich, 6’1, 205, LB/FB, 2022, Blue Springs @carson_willich
One of the state’s most explosive athletes at the linebacker position, Blue Springs 2022 Carson Willich is a tough, physical player capable of the big hit. Also a standout at full back, Willich is capable of delivering big blocks to spring a running back on offense, and quickly closing down on a ball carrier on defense. He is exceptional at quickly reading plays as they develop and getting to the ball. He has the speed to get to the perimeter or cover a receiver in space and is at his best playing downhill and delivering big hits. Willich has drawn significant college interest in recent weeks, including offers from Minnesota, Liberty, Miami (Ohio), Kansas, Kansas State and Iowa State, and is drawing interest from several other programs as well. 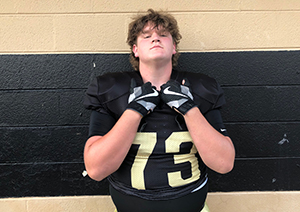 Tristan Wilson, 6’5, 300, OL, 2022, Lebanon @Tristan73Wilson
There might not be a bigger riser in recent weeks in the 2022 class than Lebanon’s Tristan Wilson, a talented offensive line prospect who appears to be next up at a school that has produced a host of talented OL, including former Mizzou and Seattle Seahawks standout Justin Britt among others. Wilson has a strong upper body, carries his weight well and has the kind of explosiveness and athleticism that Power 5 football programs look for in a prospect. A natural guard who is a road grader in the run game, Wilson has shown off his footwork on the basketball court this winter and has clips of him easily throwing down dunks in practice. Wilson has picked up offers from SEC programs Mizzou, Kentucky and Arkansas, along with Division I programs Baylor, Miami (Ohio),  UMass, Missouri State and Eastern Illinois.

SHOWCASE SPOTLIGHT: Up close and personal with Morgan Simmons (2023)