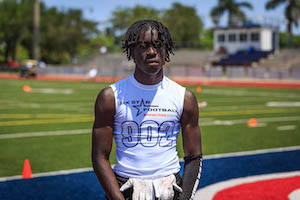 STOCK RISERS | Rising Orlando’s DB prospects to know (2024-26) – We look at some of the most impressive younger play makers in the Orlando area among defensive backs out there.  Guys that are big time talents with both great speed and footwork on their respective secondary units.

@jaydenalberty8
Alberty is one of the most athletic play makers in the Orlando area coming up, this class of 2024 big time athlete is a hot one and a great hands that has a knack for making big plays on the ball in the air, be it at DB or WR for Orlando Christian. Had 24 tackles in seven games this year from his DB spot, no doubt one of those guys capable of getting 45-50 tackles  with his speed and play making skills.

@JamesChenault23
Chenault had 18 tackles in 10 games as a sophomore and that number is only going way up in 2023 with this junior to be showing lots of flashes of greatness and play making for the FIghtin Tigers of Jones High. Chenault is a good speed play maker and one of those guys you can tell is really going to be a big one for Jones in 2022.  His experience and speed should make him a hot DB with 40-50 tackles for sure a possibility in a very highly touted year ahead for James.

@trentongummer
Just a class of 2026 player this past season, we like his chances of really being a big name as a freshman in 2022 for the program at Lake Highland. Gummer may not be big at 5-7 but his speed can really show through as he is a guy that prides himself with running stride for stride with some of the fastest up and coming WR prospects in the Orlando metro area.

@Thereallkingbj_
Brandon was a huge impact maker for the Evans Trojans defense in 2021 and was third on the team with 53 tackles in his nine games and racked up 34 solo tackles and 19 assisted tackles on a huge sophomore year for this very long and lengthy 6-3 defensive back from Orlando.   Jacob also added three tackles for loss from his secondary spot and is one of the top 2024 DB prospects in the entire Orlando area.

@jamo_jean
Jean is one of the players we have an eye on in the FLA ’24 class from Lake Mary, Jean is a talented corner that has some good speed and skills and a play maker that can make some plays and despite playing in just two games in 2021, Jean is a player that over the course of the next two years we think could grow into being a impact maker and a play maker that will be a good corner and name to know among the ‘24s at DB in the area.  Was excellent at the 6Star Football Showcase, one of the most athletic looking play makers in attendance in 2021.

@BradyManning8
Manning will be one of the future play makers that could be a guy with a huge impact form the defensive backfield at Oviedo.  Manning one of the more impressive looking play makers in the 2025 class at his position of Safety and is one of the area players that is among the most aggressive on his impressive style of play.  His best skills are  his ball skills and Manning can make plays from wherever on the field also.  Brady reports a 40 yard dash time of  4.7.

@BradleySMason
Mason is a very good looking up and coming sophomore athlete, a three sport athlete, soccer, track and field and football, no doubt this guy is one of the guys that could be a name to know in the defensive backfield for The First  Academy and is one of the guys that we expect to make a bigger junior impact in 2022 with his speed and football instincts.  A name to know from the First Academy program in the 2024 class.

@roderick_mobley
Mobley is a very athletic  player and a name that could jump onto the radar more and more with a big junior season in 2022 at Wekiva.  Mobley, also a WR, is a speed threat and a player that Wekiva looks to get more and more into the lineup with his wheels and ability to make plays in the open field.

@Julienserra16
Serra is a play maker coming up from Winter Springs in the 2024 class, this 5-8,  151 DB could be more and more of a key defensive go to weapon deep down the field and will be a player whose speed  will be key in the Winter Springs secondary unit.  Played in three games and had nine tackles, and no doubt is one of the underclassmen that played some and will play a lot in the upcoming 2022 season.  Serra will look to be one of the top 5-6 tacklers on the team as a junior for the upcoming 2022 campaign.

@JalonThompson2
Thomspson is 6-0, 170 and a corner in the ‘24 class from the Olympia program, we like Thompson’s speed and abilities to make some good plays while the ball is in the air, Look for more big plays and a guy that will be looking to get his name out there more and more and we expect a big 2022 as a sophomore could mean a lot to his future for the next level.