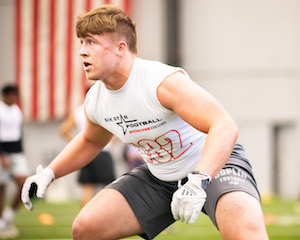 @pblecha04 NS
An energetic and athletic inside linebacker who shows good toughness and a lot of passion. He is an extremely active player who is good at moving toward the ball carrier and can make good hits right up the line. Belcha has very good size at 6’2, 220-pounds and he can adapt and take away space as well. Shows the ability to play outside as well, but is aggressive and has a great work ethic on the field and in the weight room.

@bryantbooker303 NS
A strong and extremely physical player who has good strength. Boker is listed at 5’10, 200-pounds and is able to use his power as an advantage. He can steam roll some opponents and has good decision making with his pocket pressure. Also good at helping his teammates finish plays and can target and even rip the ball away from the ball carrier. Booker has been pushing himself with his strength training and is also a competitive powerlifter as well, reporting a state best 540 squat.

@LukeGall4 4
An athletic playmaker who earned a host of honors for both as a RB and a LB. He has good size at 5’11, 200-pounds and can dissect his opponents game plan and find ways to get in position and make smart plays. He hits hard and is great at finishing on his own in space against quick and creative ball carriers. Last season Gall was awarded the 2021 Missouri class five offensive player of the year and had first team All State running back honors as well as defensive player of the year honors in the conference. A big time two-way player with some upside.

@TannerGrant20
A multiple sport standout who has good speed and shows some ability to make stops. Also a baseball standout, Grant brings good size to the field at 6’0, 200-pounds and he is a coachable player and is able to anticipate run schemes and put himself in a good position to make a play. He can find quick paths to the backfield and is able to make contact with ball carries and even pressure and help pull down the QB.

@andrewlink75
A strong and physical defensive standout who has great size and physicality. He is a first team all conference, all-region and all district honors and is able to use his size and upper body strength to his advantage. He is listed at 6’4, 230-pounds and he shows a great motor and is well conditioned for a long and physical matchup. Link has recently picked up his first two D1 offers in April, first from United States Air Force Academy and then from Brown University. He is also a standout in the classroom as he reports a 5.0 GPA and has been a 2x Academic All State.

@LucasOtt10
A first team all-state DE who has good strength and physicality. He is listed at 6’3, 215-pounds and has very good muscle tone and he isn’t maxed out yet physically. He is a productive option for Webb City (recorded 125 tackles) and is constantly looking to get around opponents and get to the backfield. He gets off the line well and looks to overwhelm opponents with his overall strength and force. He is good at pushing back tackles and can even reach out and pull down ball carriers with one hand. 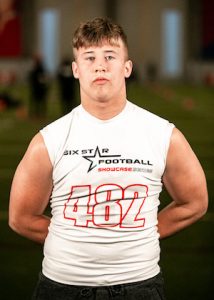 @DravenVangilder
A first team all-state LB who shows an emerging skill set. Vangilder shows good pop and acceleration and can cover ground and make hard hits in space. He has terrific footwork for his position and can change directions quickly and is even good at rushing the QB and making hits in the backfield. VanGilder sees the field well and for his size and he always seems to be involved regardless of which direction the opposing team looks to attack. Last season he recorded an astounding 173 total tackles with five tackles for loss, two sacks, two forced fumbles, four QBH, three pass deflections and one field goal blocked.

@williamwolfe04
A tall and long athlete who shows a strong frame and the ability to quickly make decisions and get to the ball carrier. He has terrific size and good muscle tone for his position and can accelerate quickly and get past blockers and make plays on the ball. An underrated athlete for Webb City who can make tackles in space and do so in an athletic way. He is comfortable in space and he understands how to take away space from running backs.  A player who is currently flying under the radar who has a good build, strong IQ and an athletic ability to break up plays and make tackles.

@JacksonYoung_11
Another underrated multiple position athlete who has some athleticism and versatility as he can see time on both sides of the ball. He’s a fluid defensive player who looks to read the QB and can run past receivers looking to block and make contact on ball carriers before they have a chance to make a move. He tracks the ball well and plays with good physicality. Also able to make good hits and can finish plays on his own or make solo tackles in space.