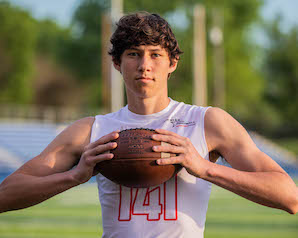 With the 2021 season underway, Six Star Football takes a look at several 2022 WR prospects who are raising their profile through the early stages of the season this fall.

Reagan
Andrew
QB | 5'10" | 185
MICDS | 2022 to form a tough 1-2 punch. Also a standout lacrosse player, Behan brings good size and strength to the field at 6’2, 180-pounds, a physical style of play and is an elite competitor. Through the first two games of the season, he has caught 13 passes for 305 yards and six TDs against quality opponents in SLUH and Park Hills Center. Behan uses his size and frame exceptionally well and plays bigger than his listed height and weight would suggest. He loves to work the middle of the field and is a god athlete, surprising opponents with his leaping abilities and yards after the catch. He has emerged as one of the state’s biggest surprises through the early stages of the season.

@DerekBrandt11
The two-way standout had a top notch performance in week one showcasing his all-around athleticism and decision making on both sides of the ball. He has a good frame and overall size and has good speed and playmaking after the catch. He can take away space from receivers and shows good power and efficiency as a tackler and can help break up plays as well. He was second in total tackles in their first game with eight, six of which were solo and he had one tackle for loss and one interception.  On offense he had the deciding touchdown late and had seven total catches for 172 yards and two touchdowns and averaged 24.6 yards per catch. 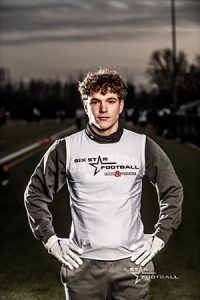 @gavinconley61
On a team loaded with future NCAA Division I talent, 2022 WR Gavin Conley can go overlooked in the media, but he’s hard not to notice on game day. He showed he is Mr Reliable on Friday, showcasing the ability to fill a key role as a slot receiver and came up with several big catches. He is terrific in the underneath game, shows strong hands and hauls in everything. Conley has some shake-and-bake in his game and is able to spring open as he makes quick cuts and can run a variety of routes. He is a terrific athlete as he showed this summer by recording several terrific combine performances. Listed at 5’8, 160-pounds, Conley is a tough, no-nonsense competitor who plays much bigger than his listed height and weight would suggest. 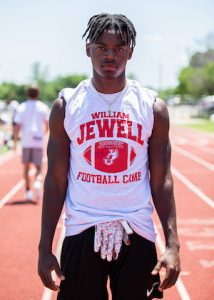 @jahaad3fort
An underrated two-way prospect who shows good athleticism and a solid upside. He is a quick athlete who was very active over the summer, competing in a number of camps, showcases and 7v7 events and was able to stand out as both a DB and a receiver. Fort is always in the mix wherever he’s placed, shows good versatility and creativity with the ball in his hands. He recorded 160 total yards in his game one performance against St Charles with 112 yards receiving, 48 on the ground. He also averaged 28 yards per catch and had two touchdowns receiving. He also showed up defensively and had four tackles and several other strong plays. A two-way stock riser to keep your eyes on. 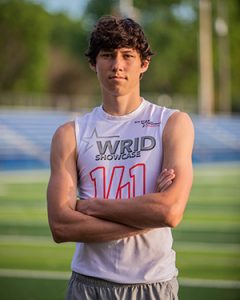 @RhettFoster23
A tall and talented receiver who has good athleticism and terrific speed. The first team All-State wide receiver shows a lot of touch and natural ability and can produce at a high level against strong DBs. He’s a three sport athlete and an All-State sprinter and hurdler as well and he is capable of making some athletic plays through the air. He has great height and length and has good leaping ability as well. He can operate along the sideline and is a real threat in the end zone giving his height and athleticism and all around ability to create separation. Foster currently holds offers from Concordia St Paul and Northern State. Foster is also a standout student and has a 3.9 GPA. 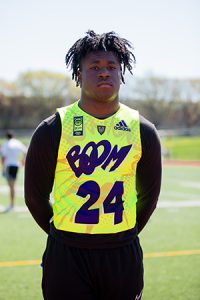 @KameronGillesp4
A standout prospect at McCluer who has the ability to create on his own. He is a talented receiver who brings a lot of toughness and experience to the field, winning one-on-one battles before he’s 5 yards off the line. He can create on his own and has good timing around the sideline and has good hands as well. He recorded four touchdowns against McCluer North Friday and had 167 all purpose yards. A player who can make things happen as a special teams returner as well as an X, Z or slot receiver. He currently holds offers from Rockford University, Iowa Wesleyan University and Olivet Nazarene University.

@bradengoellner
An underrated player who is currently flying under the radar, Goellner is a tall athlete with good hops and some playmaking ability after the catch. He is a track and field standout at the high jump and also a forward on the hardwood. He is very athletic for his size and shows good footwork and the ability to complete passes away from his body and even above his head . He plays with good speed and energy and is constantly targeted given his ability to complete plays and get open.

@cameronjhart15
Hart is a multiple sport standout who shows good timing and the ability to get open. He’s an athletic receiving option who can get up and make solid catches through the air and through contact. A 6’2, 170-pound athlete that plays fast and loose and shows some high point ability as well. He is very efficient in the red zone, has a good ability to come up big when his team is looking to score and brings good leadership to the team as well. So far this season Hart avering 14.8 yards per catch and has two receiving touchdowns and 59 total yards. Hart has committed to Missouri Baptist University.

@DrewKrobath
A nice athlete with good size and speed and the ability to see time in several positions. He’s listed at 6’2, 185-pounds and shows good awareness and the ability to create space. He has good hands, quick feet and can stay up after initial contact. He had a productive season last year and a strong summer as well, showing some upside as a receiving option and was very confident and comfortable when matched up against strong and experienced CBs. In his first game of the season Krobath had three catches for 48 yards and one touchdown and averaged 16 yards per attempt. Krobath currently holds offers from Benedictine College and Missouri S&T.

@isaackoch35
An extremely athletic prospect on the rise who has established himself as one of the more impactful two-way athletes in the area. He has great size at 6’2, 185-pounds and shows terrific awareness and athleticism that can be showcased as both a receiver and S. He has great length and a large catch radius and is capable of making some impressive athletic plays through the air and even snagging the ball with one hand. Koch brings an intensity to his game that inspires his teammates and shows a lot of leadership both vocally and through his play. An off-season stock riser who continues to perform at a high level during the regular season. A prospect to keep your eyes on moving forward. Koch reports a 4.50 40, 4.26 shuttle, 32.1 vertical and a 8’8” broad jump. 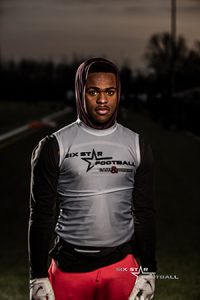 @J20Kevon
One of the state’s most underrated two-way prospects, Jacobs impressed on Friday with his play at corner where he lined up against a talented St. Mary’s WR core and held his own in the process. Blessed with good size and a long, athletic frame, Jacobs is a competitor who doesn’t back down from a challenge. On offense, he brings versatility with the ability to carry the ball out of the backfield, or line up at receiver and run crisp, clean routes. Jacobs is a nightmare after the catch as he brings elusiveness and the ability to make defenders miss in space. Mix in the ability to return kicks and Jacobs is a prospect that can do a bit of everything on the field.

@GavinOBoyle1
O’Boyle is an athletic, multiple position prospect who has great hands in the ability to track the ball. He is an athletic playmaker who has good size, strength and the athleticism to make plays through the air. He can lock down receivers on defense and has great speed and is able to play physical in time his contact with the receiver at the point of completion and can knock the ball down and even come away with an interception. He had a strong game one performance on both sides of the ball Friday and even recorded a one handed touchdown completion. An athlete with a seasoned game.