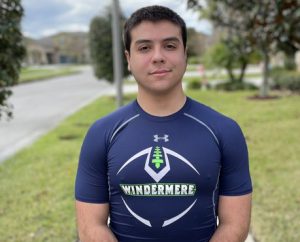 STOCK RISERS: Underrated junior OLB prospects to know (2022) – We look at some of the most impressive and underrated play making OLBs in the Florida junior (’22) class.  Players that also are listed often times at DE and can also hit you from many angles with various angles of versatility.  5-8, 185 Orlando area standout and Windermere OLB Yazan Abu-Zaid is a speedy play maker that had a good 2020 season and will look to be a 35-40 tackle guy if not more in 2021 as a big time senior play maker.  Derek Cortes is a Miami Killian 6-3, 210 big and long framed LB that can blow up the holes and make some impressive stops and has a major upside to look at for the next level.

Yazan Abu-Zaid, 5-8, 185, OLB, 2022, Windemere @Yazan_Abuzaid25
One of those guys that is an impressive downhill play making LB to know in the Florida junior class, Abu-Zaid is a player that uses speed and closing acceleration to be one of the hot play makers in the Orlando metro area to keep on your next level watch list.  Yazan racked up a very impressive 21 tackles, had three fumble recoveries, and one pass deflection in just seven games in 2020 and will be a guy with some  big stats in a hopeful 2021 season ahead.   One to keep an eye on that has impressive next level skills. Has some speed and makes up for his frame with grit and outside edge coverage, should be a top defender in 2021 for the Windermere D-Unit. 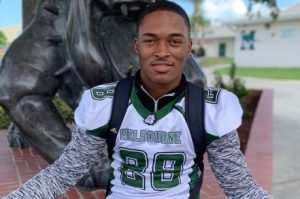 Jafari Clarke, 6’1, 205, OLB, 2022, Melbourne @ClarkeJafari
Jafari Clarke is a very talented play maker and one of the busiest play making LBs out there in the Florida’22. A player that is a downhill tackler and will make big plays on both sides of the  ball, both as a fullback that hits the lanes hard and has both speed and some power on his 6-1, 205 pound frame.  From his outside backer spot, the 205 pound Clarke is a guy that doesn’t let anything by him, a speed guy and a good physical play maker and tackler on the outside edge, Clarke can be a major force and you know when you have been hit by the hard hitting impressive class of ’22 play maker. 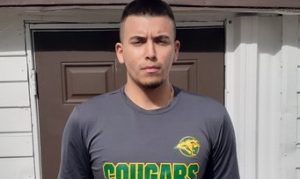 Derek Cortes, 6-3, 210, DE/OLB, 2022, Killian @DerekCortes8
A very smart and quick play reader that can blow up the gaps and use closing speed to make some big time plays in the backfield and tackles in the middle.  With his 6-3, 210 frame Cortes really has a big time next level jump out at you frame as not many LBs are at the 6-3 plus line for height, Cortes has that size and is a natural play maker that we think should make him a standout hybrid type LB/DE guy, likely more at LB with his speed and 210 frame, but some versatility to come off the DE spot when needed makes him even  better for the next level.

Gerald Hernandez, 6-1, 220, OLB, 2022, McArthur @GeraldH_18
Wow, 6-1, 220 and a guy that brings that load of power to be a punishing play making hitter on the field for McArthur. Hernandez  is a player that can be a major off the edge speed rusher, and is a guy that can line up both at OLB and DE, Hernandez is a major force and a player that is among the best of the best for bringing the heat on the QB, a guy that plays like he is shot out of a rocket, and 220 pounds can bring it, very strong and fast and a guy that we like a lot of a college ready backer that can also drop back in coverage and make some nice plays on the football as well.

JW Hudson, 6’0, 175, OLB, 2022, Taylor County @Jw_Hudson9
At 175 pounds Hudson will use his speed from his outside backer spot to be a major play making threat for Taylor County.  Hudson is one of those speedy play makers that really can be a guy that will do anything to help the team win and is a true ruthless and a nonstop worker. Also can slide over and play some MLB when needed or anywhere the coach puts him at.  Was named a runner up Al-Big Bend LB. A nice looking well rounded athlete who had a 31 inch vertical: 31 inches and can squat 415 pounds.  Look for Hudson to be a force again in 2021 with both speed and major all-out playing style for Hudson  County, a hot pick to watch out for among Florida’s top up and coming class of ’22 OLB prospects to know.

Marquis Jones, 6’2, 205, OLB, 2022, Trinity Catholic @Marquisleejone3
With big time offers from Coastal Carolina and Liberty already, no doubt Jones has been a radar maker and with a huge senior year left we expect a load of offers to be heading the way of the big time talent 6-2, 205 OLBs way.  A huge impact maker for Trinity Catholic, Jones has a nice power frame at 6-2 and is one of those OLBs that can really blow up plays and be one of the most disruptive play makers in the state.  Jones is a dangerous bone jarring tackler off the edge, fast enough to make plays on RB/WR in the open field and also has an elite D1 frame at 6-2, 205, both some height and major power.  Jones is a pure difference  maker and a player we think should land some huge offers in 2021.  Racked up a huge 105 tackles in (2020)  and is a very fast 4.7 guy in the 40 yard dash.

Kheylan Martin-Brown, 6’0,200, OLB, 2022, Chaminade-Madonna @_f0reignb0y50_
One of the guys on the big time Chaminade-Madonna program that is a huge outside danger prospect for offenses to be on the alert for, the 6-0, 200 Martin-Brown is one of the best and most athletic play makers in the the ’22 class for the Sunshine State’s top play makers.  Kheylan can really be living in the backfield before the offense knows what happened and is one of those players that lets you know it, emotional and a team leader that fires the team up  with his all out style of play and speed.  Martin-Brown gets great next level penetration into the backfield and is a guy that has huge speed, and despite being just 200 pounds,  has a muscular frame and hits like a guy that weights 230 pounds. Big time athlete that has speed and power and a must see for D1s to take a look at.

Bruce Meurer, Jr., 6’0, 193, OLB, 2022, Eustis @meurer_jr
A player that needs to be on the radar as a very fine looking junior class of ’22 outside backer and a good one from Eustis.  Meurer is a player on the outside that can really make some big plays and put the pressure on from the outside of the Eustis defensive unit.  Meurer may project more as a next level fullback with his time on that side of the ball being impressive as a guy that uses vision to make a good run that adds an extra 3-4 yards with pure power on his 6-0, 193 pound frame, Bruce may end up becoming much more of a Fullback that has vision, power and toughness build for the next level. 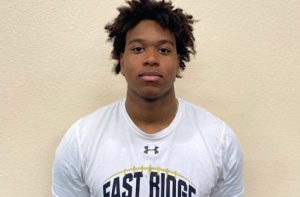 Jaden Ortiz, 6-0, 210, OLB/DE, 2022, East Ridge @jadenortiz41
No doubt a tenacious fast play making hybrid OLB that can also play some DE when needed, Ortiz is powerful and a hitter that can  also drop back into the passing lanes and be a major impact maker.  A guy that has a very well rounded game and can make things happen that are very impressive.  Ortiz, a 6-0, 210 LB from East Ridge, can deadlift 375 pounds, and is a player that uses some of that power to be a very smack down type tackler.  Reads plays very well and reacts quickly to make big time stops against the run on  the outside edge and finishes off tackles very strong with power.

Chris Pressley, Jr., 6’0, 215, OLB, 2022, Wiregrass Ranch @chrispressleyii
Pressley, a huge impact maker for one of the top teams in the state at Wiregrass Ranch, is a pure force on the outside edge and a powerful hitter at 6-0, 215 pounds.  Pressley can really make big plays and is coming off a 2020 where he had 32 tackles, three tackles for losses, and three sacks from the outside edge. That guy that the offense gets tired of seeing come around the corner and make big stops against, Pressley has the makings of being a senior that could rack up 60+ tackles, 5-7 sacks and some big tackles for loss numbers.  Experience and athletic skills looks to make Pressley one of the hottest LB prospects in  the  ’22 Sunshine State class entering 2021.