A look at several rising prospects to know. 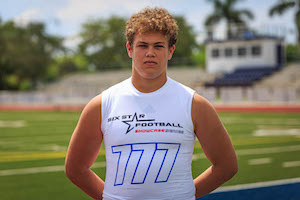 STOCK RISERS | Young Broward Area defensive playmakers on the rise (2024-25) – We look at some of the impressive up and coming defensive standouts to watch out for and up and comers on the defensive side of the ball in the 2024 and 2025 classes. A player to know is DE and 2025 Flanagan Defensive End Franklyn Johnson, Jr., a name to know and a player on the rise.

@AshtonAbell2025
Abell is 6-1, 220 and a two way player on  the line at Coral Springs Charter, plays center on the offensive side of the football, Abell is a player that is a very physical and tough player that has a good looking future. Abell will be one of the two way players to watch, has played more on the offensive line so far, his power and toughness on the O-Line has been impressive as this freshman has dominated in a big way and has proven himself as a good looking big man in the trenches to be reckoned with.

@_GabrielCash15_
Cash is a player that is an up and coming standout at Defensive End for the Coral  Springs program, Cash is a edge standout that has been a guy that is a proven tackler, a very aggressive defensive standout, smart play reader that is very active in both special teams action as a big time play maker and a guy that is a great spy looking kind of end, great speed to make plays in the open field at 6-2, 200 pounds also.  Cash reports a 3.6 grade point average also in the classroom.

@bowknows44
Drewes is an up and coming impressive middle man in the 2024 class at American Heritage High School, 6-1, 190 this middle backer is a player that can really burst through the line and is so quick and fast that he can make a tackle before a play even has a good chance to develop into positive yards.  Love his speed, not many middle backers has his speed and abilities to make the plays as fast and effective.  Huge potential is this speedy play maker and watch list prospect at backer.

@Denzel_24
Johnson has the makings of being the most fierce and efficient tackler in the Broward area among 2024 class sophomore standouts, a player that can make a play from anywhere on the football field.  Johnson racked up  a huge 84 tackles on the year with 39 of those being solo stops, Johnson was a guy that was fast and furious paced all 2021 and is a guy ready to land several offers with his proven onfield performance and his showing out as a hot speed outside backer to know.

@KinlockLevy
A hybrid and impressive looking combo DE and outside backer, Kinlock has some impressive toughness and is quick at 225 pounds and 6-2 inches tall.  Kinlock is a player that is very tough, brings that same grit that proves him tough on the wrestling mat as well,  a grit and tough player that loves to get after it and dominate. Plays very fast and is a very hard hitting machine, comes off the edge very fast and then makes plays quickly and goes 100 mph all game long, good looking tenacious play making athlete at American Heritage.

@FJohnsonJr11
Johnson is one of the top young players on the Flangan defensive unit, there are always guys you can see coming up that are quickly developing into the next big time play makers and at Flanagan Johnson’s name is one you are hearing more and more about as a watch list prospect with some speed and tackling skills that should bode very well in his future off the defensive edge and play making coming off his side of the football.  Good potential and a big kid with big hands for his size. Defense he has great potential. From his TE spot he can run pretty good routes and can snag the ball with his big hands.

Love this young man’s length at 6-2, and at 220 is not just another lean player but has some punch and pop to playing the defensive end spot for the Cardinal Gibbons program, Klein is a player that has a nice longer wingspan  and can be a havoc creator with his reach and length as a major tenacious pass rusher and edge closer on the running plays to his side of the ball, athletic and impressive, Klein is a hot prospect in the making in the 2024 class. Klein was a standout last spring at the Six Star Football Florida Showcase.

@L2F30
No doubt some guys have that major athletic look and frame and that’s the mold that Joshua Lloyd has from Deerfield Beach, a very impressive looking athlete, we think at 6-2, 225 Lloyd has some of the best potential to be a major college football player in the area, one of those guys that is tough and powerful on the  edge and could end up becoming one of the most impressive ‘24s among Florida’s best rushers to know.  Georgia Tech offered in early August, his list will be a very long one as times goes  on, this  guy has major stud athlete written all over him.

@KeithT11_
For sure one of the rising stars among Broward Area defensive standouts, this Deerfield Beach big timer has 220 pounds of pure hitting power that has been impressive early in  his career, no doubt a super sophomore prospect making some big waves in the area, Thompson spells D1 tier talent with his speed and combo power package at the backer spot.  No doubt a player that in for a big junior year ahead and one of the players we consider among the elite ‘24 defenders in the area.

@Jalen_Young2
Young is a very athletic looking play maker and a two way WR/DB prospect coming up that really could be one of the next great ones from the Cardinal Gibbons program.  Young is one of the guys in the 2025 class that has a nice athletic frame and good speed, Young is a player that can make some great plays with his hands, although Young was more of a WR this year, no  doubt his speed could translate well to either side of the football over the course of the next three seasons.  Great hands, speed and was a proven great open field threat to throw to as a hot target this 2021 season.