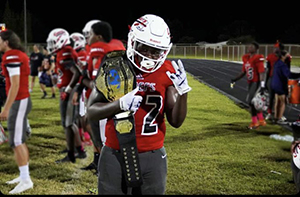 STOCK RISERS | Young Palm Beach area prospects to know (2025) – We take a look at some of the most impressive looking players coming up in the Palm Beach area in the class of 2025, the fab freshman of the area that are names to know entering the 2022 season ahead.

@_NicholasAcosta
Acosta is a player that can make some impressive blocks happen and a player that is very tough and excellent with his hands in the trenches, this 6-2, 272 big mand and versatile tackle and guard combo from Royal Palm Beach is a name to know among the 2025 class big men prospects in the area and we love his power and aggressive style of play, has the physical play of being more as a veteran with his toughness and all out take you down to the ground rough and dominating style of play.

@JamarBrowder
Browder is a very impressive looking big man in the offensive passing attack at Santalucces, 6-5 and a guy you throw the ball near him and he can make the impressive play on the ball happen.  Browder is a player that can really make some huge plays happen and is one of those guys that can come up with those wow type catches and plays that are huge for his offense.  Had 138 yards  receiving as a freshman, second on the team and will be the leading returning WR on the team, no doubt about it that Browder will look to be the go to play  making target come 2022.

@ChagaevAlan
One of the big men talents for the Spanish  River program, Chagaev is a very talented looking blocker in the trenches, also can be a DL and slide over and give them some power on that side of the football as well.  Alan is a big and impressive power blocker that can really blow some guys up down the field and can play up and down the line well.  Has some good movement and footwork on the line and is a player that we like to have a very big sophomore year in the trenches  as well. 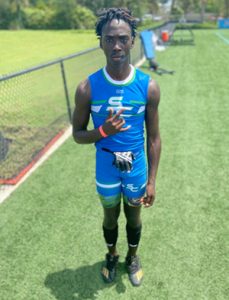 @takeemdeep9_
One of the most talented play makers in the 2025 class in the Palm Beach area, this Somerset Canyons freshman was a WR that has a 6-2 frame already and should be one of the major weapons in the future at Somerset Canyons as a to deep ball threat and speed weapon to know in the lineup.  Charles led the team in  receiving yards  as a freshman  with 599 yards in nine games  and had six touchdown receptions on the year as well.  34 receptions hauled in and 17.6 per catch along with a 66.6 per game average for a huge freshman season by Charles.

@JoeDailey19
Dailey is one of the up and coming offensive players to know in the 2025 class, a King’s Academy QB prospect, Dailey is a good looking thrower and a player that could have a big impact soon as a key weapon and deep ball passer.  Played in seven games in 2021 and will look to use that experience to grow and get better and better in the coming years as a young up and coming QB in the program.

@Gideon4Douglas
Douglas is a very impressive young athlete coming up from Jupiter Christian and a player that can make some huge runs out of the backfield,  5-10, 155, not huge, but has the speed to take it to the house at any time during the game. Douglas is a very talented play maker and athlete that can make some huge plays happen. Had 246 yards on 39 carries for his freshman season at Jupiter Christian.

@Jui4edUp
A very hard worker and an excellent footwork play maker, Harrington is one of the most physically gifted and talented looking athletes coming up in the class of 2025, very good footwork, a shifty play maker on the football field and a player that is looking to have a huge sophomore season ahead.  Harrington has all the athletic skills, now its time to watch that talent go to work and produce some big time plays and offense at Somerset Canyons. 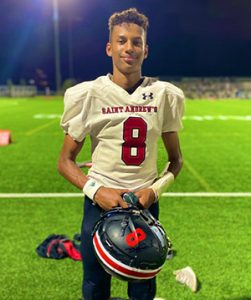 @JaxsonJewell
One of the more impressive looking freshman in the area and a QB also, this 6-2, 160 slinger and big time arm from Saint Andrew’s is a name to know and a talented strong armed QB that can make some big time throws happen. Jewell is a very gifted dual threat QB prospect that has both a strong and accurate arm and some impressive speed and wheels as a running QB as well. This long and lean 6-2, 160 team leader is a QB of the future for the program and a very talented play maker that really should turn some big heads as a sophomore in the up and coming 2022 season ahead.
📸   courtesy @JaxsonJewell

@Tre_Robinson2
Robinson is one of the impressive speed backers to know and watch out for coming up and is a player that can really take over a game in the middle of the defensive unit.  Not a big player but can make up for that with some impressive speed on the outside spots and is a nice edge spy play maker coming up with a big motor and a high energy level to watch out for. 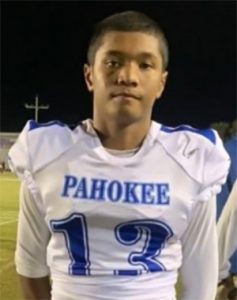 @austnsimmons
Simmons is one of the most talented young play makers  to know in the  freshman class for the Palm Beach area, this freshman Blue Devil QB prospect is also a very big and long 6-3 inches tall and is a long strider with the football in his hands. Simmons racked up a very impressive looking 1,684 yards and had a big time 66.2% completion mark as well.  One of the more talented  play makers out there to know for sure.